Start a Wiki
In Episode 9, Kururu invented the gun (also called the Nostalgia Gun) to change peoples' ages. However, the people who were shot with the gun had three hours to return to normal or else they would be stuck at their current state. The only two people shot with the gun in the dubbed episodes were Aki Hinata and Giroro. Later in the Japanese episodes Keroro, Giroro, Dororo, and Fuyuki were also transformed. The latter somehow returned back to adult form after the three hours have passed (possibly because Kururu modified it).

Tamama and Kururu were also shot by it. Tamama didn't know he was, and lost his tail. This led to everyone else thinking that he had finally grown up. Later, he grew his tail back. Kururu had an accident in the lab, causing a series of explosions. During the chaos, he was shot by the gun, turning him into a baby, and the gun itself was destroyed shortly after. There was no way the Platoon could turn him back, until Mois started talking to him. He quickly repaired the gun and shot himself with it, turning back to normal, to avoid "growing up to be a nice, sensible individual". 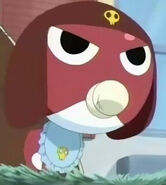 When Giroro got shot by the gun.

baby giroro
Add a photo to this gallery
Retrieved from "https://keroro.fandom.com/wiki/%22If_I_Could_Do_My_Life_Over%22_Gun?oldid=32876"
Community content is available under CC-BY-SA unless otherwise noted.