"We Can Make Everyone Alive" gun

View source
watch 01:36
We're Getting Mutants in the MCU - The Loop
Do you like this video?
Play Sound

The We can make everyone alive gun (ボクラハミンナ生キテイル銃, Bokura wa Minna Ikiteiru Juu) (Turn Earth's animals into soldiers gun (地球動物兵士化銃, Chikyuu doubutsu heishika juu) in the manga, Animal Animalizer in Funimation's version) is one of Kururu's inventions. It turns any animal into a human.

The gun is first seen when it is used in an attempt to create an army out of animals. This plan failed, as every single animal refused to join. In the second half of the episode, Koneko uses it to become a human. She does it to earn the love of Giroro. Her human form is also revisited later in the series.[1]

This gun is now in Giroro's possession ever since Kururu dropped it (probably on purpose) in episode 196-b.

In the manga, it slightly looks like a Bellsprout from Pokémon. 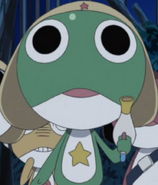 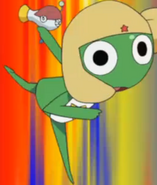 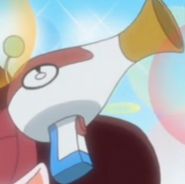 This article is a stub. You can help the Keroro Wiki by expanding it.
Community content is available under CC-BY-SA unless otherwise noted.
... more about ""We Can Make Everyone Alive" gun"
RDF feed
Maintenance
NJ +
Advertisement