723 is a character in the Keroro Gunso Franchise.

The first one introduced herself as the "rule patrol machine", while in the manga she says that "She is the Ordinance Patrol Machine.". She and other 723's are in charge of punishing others those who break the rules.

The first one appeared and attacked Giroro, after she implanted the prohibition sign of a gun for everyone to have a healthy lifestyle, this angers Giroro. Soon after all the 723's start to 'protect' everyone from harm, ending up attacking Keroro, Tamama, and Natsumi Hinata. Soon Giroro placed the prohibition sign's on all the 723's, causing them to see each other as threats. They soon started attacking each other.

She looks exactly like Natsumi's head, but with cybernetic features, she has gray plates for ears and her hair is more a cyborg appearance. She also has a black prohibition sign on her forehead (originally the word 'Prototype' in the manga) . Her eyes are oval and black, giving it more simplistic and cartoonish looking.

723 are obsessed with their tasks and willing to attack anyone every time they see someone holding objects (especially Tamama) that can hurt anyone. 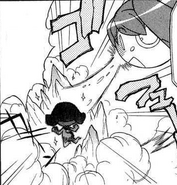 Add a photo to this gallery
Retrieved from "https://keroro.fandom.com/wiki/723?oldid=51534"
Community content is available under CC-BY-SA unless otherwise noted.