In Episode 44 B, after Kururu distracted Keroro Platoons and the Hinata siblings, he challenged a newly arrived Aki from her office in a battle in their mechas to determine the strongest lifeforms. Witnessing her robot, Aki rode her motorcycle and entered into it's ponytail which placed her inside a docking bay. With Kururu in his Kururu Robo, both of them battled each others. However, since AK966 is still in the prototype stage, it started to move on its own and attack Kururu Robo. In the end, she managed to locate the shutdown button and shut the robot, resulting both her and Kururu Robo damaged. Nonetheless, an escape pod was released from AK966's head which brought Aki and Kururu home.

In Episode 103, AK966 was one of the five robots autopiloted by Kururu in an assault against Tororo's hideout during Garuru Platoon's invasion.

Akibot is a very strong, and flexible robot, being able to remove most of body-parts. 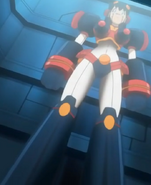 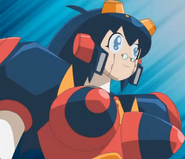 Akibot on the Volume 11 cover.

Add a photo to this gallery
Retrieved from "https://keroro.fandom.com/wiki/AK966?oldid=49942"
Community content is available under CC-BY-SA unless otherwise noted.