Aku-Aku (アクアク, Aku-Aku) is a recurring antagonist from the Keroro manga, who also appeared as the the main villain of the Keroro Gunso the Super Movie: Creation! Ultimate Keroro, Wonder Space-Time Island, de arimasu!!.

Aku-Aku is first described as a peculiar composite organism. It shows an ability to take characteristics from victims it has eaten, using that to gain Keronian-like forms.

In the anime, he is contained by water, although it won't kill him.

Aku-Aku is a small purple blob with only one eye and a large blue jagged mouth in his original form. Once he eats a Keronian, he turns into a Keronian similar to the one he ate except a more demonic-like appearance, purple stomach, and a yellow jagged collar. The symbol on his forehead is the same symbols of the Keronians he has eaten on top of a staff-like symbol. The symbol on his stomach however, resembles his eye in his original form.

Aku-Aku are evil spirits that love to play pranks. When a diver managed to take away a moai statue that was keeping him inside, he escaped. He managed to defeat Alisa and her father easily. After a tough battle with Keroro and his platoon, he manages to steal Kururu's knowlege, Tamama's power, Dororo's skills and Giroro's determination by swallowing them, absorbing their energy and then spitting them out. He doesn't attack when it's raining because he is afraid of water. When Keroro is transformed into Makemake, he is surprisingly beaten up by Keroro but comes back to take him down. As he was about to defeat Keroro, he is grabbed by him and purified by the spirits of the moai statues. However, he returns in a smaller blob form and is soon eaten by Alisa's father.

Aku-Aku's name is a direct reference to the Aku-Aku from Easter Island's Rapa Nui mythology mythology. They were ancestor spirits that although seen as guardian deities, also could take trickster and even devilish aspects.[1]

Hit the photo to see it move 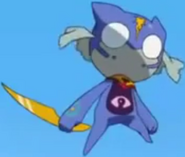 New Akuaku in recent manga
Add a photo to this gallery