Alea (アレア, Area) is a main character and boss in Keroro RPG: Kishi to Musha to Densetsu no Kaizoku. She is the eldest sister to Mimikry and Illiinx.

Alea is shown to be very polite and laid-back. However, despite being very sweet on the outside, she is very mischievous on the inside, as shown when she dislikes Giroro's brash behavior and words, and thus has 4 washtubs fall on him at random times.

Alea has pale skin with purple hair that is curly at front and straight at back. She wears a mask at the right side of her hair and has a blue white-ish coat with long sleeves that has blue and pink triangles with a thick black outline. She has lines and blue lines to resemble a machine or a robot. And she wears a belt with a ribbon like thingy at her back. She wears has purple-brown like tight with socks cutted off and wears high-heel sandals. She also has a fuchsia-pink-colored shirt with a skirt. She has Y-like wings and a magic staff wich looks like a paintbrush with rings and circles float around them. At the end of her coat, she has a cut-off like thing. She has sky blue eyes and has eyelashes similar to Momoka Nishizawa's. She is dressed like a traditional Japanese Mountain Priest.

Alea is stated to be a very skilled magician, this being powered even more by her luck. Most of her abilities are activated using her staff including: 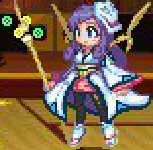 Alea's official art.
Add a photo to this gallery
Retrieved from "https://keroro.fandom.com/wiki/Alea?oldid=44057"
Community content is available under CC-BY-SA unless otherwise noted.