Andromedian Huskies (アンドロメディアンハスキー, Andoromedian Hasukii) are a species of space pet in the Keroro Gunso Franchise.

The Andromedian Husky's fierce appearance makes it a perfect guard dog, but Keroro explains that they are actually caring pets who are beloved throughout the universe for their "tender and affectionate nature."[1]

In Episode 8 (manga chapter 15) the Andromedian Husky is used as a guard for the newly created Keroro Platoon base constructed below the Hinata's residence. In contrast, the anime refers to it as actually a robotic dog. In both versions Fuyuki Hinata and Momoka Nishizawa run into the Andromedian Husky while wandering the base where it is completely defeated by Momoka in her desperation to protect Fuyuki. In the manga Momoka tears off one of its legs and throws it down a trap door while in the anime she pushes it so hard that it smashes into the ceiling and explodes.

There is some contrast in the Andromedian husky's design between the anime and the manga but they remain primarily the same. 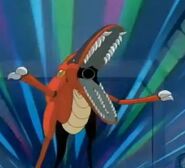 How the Andromedian Husky appears in Episode 8 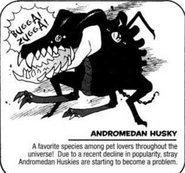 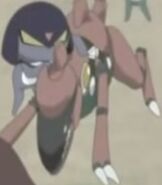 Retrieved from "https://keroro.fandom.com/wiki/Andromedian_Husky?oldid=45001"
Community content is available under CC-BY-SA unless otherwise noted.