Angol Goa (アンゴルゴア, Angorugoa) is a character featured in the Keroro Gunso Franchise. He is the original King of Terror, the father to Angol Mois and the husband to Angol Tia.

Angol Goa was an old friend of Keroro and while during this time he became named the King of Terror, due to his skills in destroying planets with precise accuracy. He soon married Angol Tia, whom gave birth to his only daughter, Angol Mois. Once she was born he taught her the ways of becoming just like the rest of their race in being planet destroyers. He allowed Keroro during these times to visit his daughter, while he continued his planet destruction.

In Episode 16, a flash back shows him telling his daughter to see what is inside the hearts of Man, so that she will be grateful when she destroys the planet. He appears later in Episode 41. He appears after Keroro rolls a one. Mois says that she invited him and is glad he could come, the Angolion father and daughter soon start destroying Earth. When Natsumi asks why, Mois's father states that if he doesn't destroy a planet, his wife won't cook lasagna (Funimation dub). Giroro, angered by the noise kicks the game and sets everyone free, while Mois's father flees stating that Giroro is mean.

Angol Tia - Wife. In the Keroro Gunso booklet, it is stated that he is a submissive husband.

Angol Mois - Angol Mois is Angol Goa's daughter. The two appear to truly love each other as they can be seen destroying planets together.

Keroro - Old family friend of his, possible due to Keroro's cute face.

Giroro - Although they haven't formerly met, it appears that he is scared of Giroro, saying if he doesn't leave the 'Mean Frog' will hurt him. 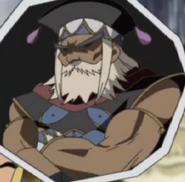 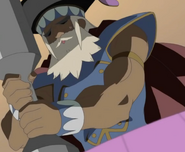