For the previous King of Terror and Mois's father, see Angol Goa. 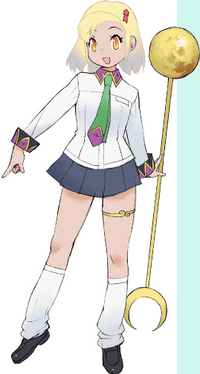 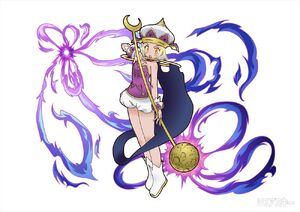 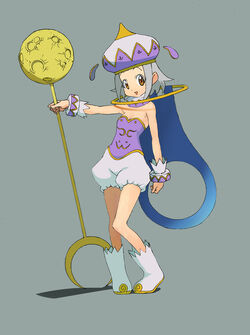 Angol Mois (アンゴル＝モア, Angoru Moa, known as Angol Moa in the manga) is a major character in Keroro Gunso who is portrayed as the "King of Terror".

When Angol Mois was younger, she played around with Keroro, earning him the title Uncle (おじ 様, Oji-Sama). When she got older, her father told her that she would destroy Pekopon. To prepare for her goal, Mois destroyed other planets. Mois was so excited that she came 500 years early. However, she took a nap and missed the date by 5 years.

Mois's father, is the original King of Terror. She cares deeply about him and was very pleased when he came to visit in Episode 41. She wants to one day destroy Pekopon and make her father proud. He was also the one who told her to find the strongest pekoponian, most likely to protect her from getting captured.

Mois's Cousin. Mois appears to want to make her happy as well just like her mother, and she is sad when Angol Fear comments on how disappointed she was in her.

Mois has been friends with Keroro ever since she was little. Calling him Uncle (Oji-Sama) as an affectionate term. However, it appears that Mois secretly loves Keroro, doing whatever he asks to make him happy. Even in Episode 63B, she really upset when she hear Keroro telling his dad that he will marry Natsumi, and almost commiting suicide by using up-scaled Hellmageddon (100:1) before stopped by Fuyuki and Natsumi. She also will commite suicide when Keroro almost dies, as example is in Episode 110 she almost using Apocalypse Hellmageddon (1:1) when Keroro suffering mysterious illness. Mois also will hurt anyone (except Hinatas, especially Natsumi) that hurts Keroro (Mostly hurting Giroro). Keroro is also the only reason that Pekopon hasn't been destroyed yet.

Mois is unaware of Tamama's deep hatred for her. She sees Tamama as a friend and she comforts him when he is sad. She is usually seen doing many activities with Tamama. (Only due to Tamama, wanting to beat her in cuteness, and win Keroro's love.)

Mois is the only person who can make Kururu crack, due to her pure innocence. Kururu is shown to fear her, although Mois herself is somewhat scared of Kururu. Mois and Kururu are partnered together a lot, and Mois has learned her knowledge of technology from him.

Angol Tia is Mois's mother. Mois appears to love her mother deeply, wanting to be just like her, and is shown to be disappointed by how she can't follow in her mother's footsteps and destroy a planet.

Asami is the doppelgänger of Mois. When Mois first landed on Pekopon, she followed her father's wisdom to choose the strongest Pekoponian she could find. When she saw Asami's fighting skills, she was instantly impressed. Mois was deeply touched by Asami's story, and said she would destroy the planet so she could ease Asami's pain. And only stopped when Asami told her to, saying she understood what Mois was trying to prove.

Mois sees Koyuki and Momoka as friends. Joining them in making the group MorePeachSummerSnow along with Natsumi. Angol Mois joins the others in protecting Momoka from her father, meaning she does care for Momoka's happiness.

Mois lives with the Hinatas and sees them all as friends. Natsumi, unlike with other aliens, actually doesn't see Mois as suspicious, and even notes her a good friend.  Fuyuki is a notable fan of Mois, and is usually seen excited whenever Mois is about to destroy the world. Mois also shares her love of Fuyuki as a friend, and is delighted by his fanboy attitude towards her. Aki and Mois haven't interacted all that much, but Aki appreciates Mois's help around the house, and sees her as a good child. In the flash series, while in space Aki and Mois are shown talking, showing a friendly tone among them. Mois also never attacks the Hinatas when they hurt her Uncle.

Mois, unlike with Tamama, sees Pururu as a rival. Mois is usually seen fighting with her, if fighting is needed. However, Pururu does address Mois as her assistant nurse. Mois also tries to block calling her Oba-sama and seems to respect her. She is also usually paired up with her when the Keroro Platoon and the Garuru Platoon fight.

To blend in with the Earth people, Mois also transforms into a tanned, bleached-blond teenager (kogal) who is always seen in a school uniform and loose socks. Asami, the model for her human form, is said to be a high school student, although she doesn't have an official age. Mois' true form is a pale gray-haired girl who wears a purple-and-white magical girl costume.

In the flash series, she always keeps her human mimicry up. When using her powers or just hanging out in the base, she sports an hybrid outfit that incorporates a gold ring on her leg, and the Angol markings of her outfit on a necktie and sleeves.

In the manga volume 12 chapter 94 and volume 14 chapter 117, alongside the anime's episode 247-A, Mois temporarily transforms into her true "judgement day" form which is also described as "adult" form in the anime. Even her Lucifer Spear has a differnet shape in this form, which overall resembles Angol Tia. Its design differs between the anime and the manga, with the anime featuring a skirt, while in the manga it's more like a bikini botton.

"July 1999. The King of Terror descends from the sky and King Angolmois awakens."[1] Angol Mois is the "King of Terror", who is ditzy and insecure as a result of her impact from space. She was sent to planet Earth to arrive in July 1999 for Earth's destruction, as predicted by Nostradamus, under orders from her father. She states that during her first appearance she told Nostradamus to deliver a message to the humans warning them of her arrival. She arrives 500 years too early and takes a nap in orbit, and, in the anime, wakes up in May 2003, 4 years too late. In the manga, she lands near Fuyuki, while in the anime, she lands on Giroro's tent. In both, she is taken into the Hinatas' home, where she is nursed back to health by Natsumi. When she wakes up, she reveals her true form and begins to destroy the Earth, until Keroro, who arrives later, is persuaded by Fuyuki to stop Mois. She is close friends with Keroro, who she calls oji-sama, which means, roughly, "Uncle". Tamama often competes with her for Keroro's attention (and affection). Her transformation sequences, stylized costume, and related accessories may make her a parody of the "magical girl" genre. As an added note, Mois' Pekopon-form wears a hair clip explicitly in the shape of the Science Patrol's Ryuusei-mark in the anime (while Asami whose form/soul she "borrowed" has an Ultra Garrison-mark hair clip). Her name is frequently used in puns on the Japanese phrase moe-moe, which usually refers to a cute girl who appeals to older members of the audience.

Although the Lord of Terror, she is anything but terrifying. She's sweet, clumsy, and peppy but can be scary when she's in Angol form, and uses her Lucifer Spear to split earth-like substances. The other side of the Lucifer Spear, it opens her diary that may not tell the truth. She got her Earth look from when she first arrived in 2002 (2009 in the anime), before she met the Hinatas. Her father had encouraged her to see only herself as important as this frame of mind was needed to become an effective planet destroyer. Thus, she chose the form of a Japanese school girl she saw ending a friendship with another girl for her own benefit. She is shown to be somewhat immodest, and is not afraid to go topless or strip completely naked in front of others.

The Angols use seemingly magical weapons to destroy planets. Mois uses her Lucifer Spear as her weapon. It is a long golden staff with an asteroid-like sphere on one end and a crescent shape on the other. Her signature attack is the Hellmageddon (1:1), which can destroy a planet in a matter of seconds. When not destroying a planet, she often uses a scaled-down version of this attack (that can be as small as 1:1 trillion). Sometimes when she sees someone hitting Keroro, she transforms and uses this version of Hellmageddon, which usually catches others, including Keroro, in the blast.

Once in Episode 63B, she almost used a scaled-up version called ArHellmageddon (100:1) when she was completely upset. There is an attack called Dark Hellmageddon in Episode 71 that if used can make a planet implode. Also, in Keroro Gunso The Super Movie, Mois also able to summon huge meteor/asteroid with her Lucifer Spear.

When using Lucifer Spear, she usually transforms to her true form. However, she also rarely seen using her Lucifer Spear without transforming to true form. Such examples can be seen on Episode 63B and Episode 350,

Mois' usual "true form" isn't actually her strongest one, with her having a cerimonial "judgement day" form, first shown in in volume 12 chapter 94. In this form, even the shape of the Lucifer Spear changes, with the crescent blade changing into a two pronged fork. Mois in this form is able to use a form of Hellmageddon that can destroy a planet instantly in a way that she describes as a "peaceful ending". However, she's stopped from using it by Dororo, who knocks her out by sneaking upon her and hitting on the back of her head. Later on, in volume 14 chapter 117, she uses it to destroy a planet that was heading in a collision course to Earth, although we only see it happening from Earth's perspective, so she disappears into the skies and then there's a huge explosion of light.

In Episode 247A, she drew an eye symbol on her head, similar to the one that appears on Angol Tia, and loses control of her powers, automatically assuming that form (since she was using special Kururu make up which modified the user's personality based on its application). In this state, an aurora appears everywhere on earth, followed by an earthquake, although the attack is stopped at this point when he transformation is cancelled.

She has two weaknesses, a large purple crystal called the Angol Stone, which Taruru used on her in episode 102 when she was about to attack Garuru; and her "uncle."

The Angol Stone is a magnet-like substance that literally lures and traps the people of Angol inside the crystal and immobilizes them completely, somewhat like how kryptonite bothers Superman.

In the Funimation dub, she randomly speaks Spanish on the request of her father to confuse the Pekoponian.

Angol Mois' name is derived from the name of a (real) prophecy of Nostradamus, "Angolmois."