Student
Asami (麻美, Asami) is a minor character from the series Keroro Gunso. Angol Mois based her human form on Asami. She is voiced by Mamiko Noto in Japanese and Laura Bailey in English.

She is supposed to be physically identical to Mois. However, in the anime, she's drawn with more aggressive slanted teal eyes. She also usually has a stylized S hair clip rather than Mois' shooting star one.

Later in the manga, Asami stops tanning and dyeing her hair, going with her natural black color and a different hair style, while she keeps her original appearance up to the ending of the anime, when she's making her university entrance exams.

Asami was a street thug always looking out only for herself. Shortly after arriving on Earth, Mois saw Asami discarding a friend who asked for her help in order to avoid getting mixed up in her troubles. Mois considered the act of throwing away a friendship a courageous act, emblematic of the "egoism" that her father instilled in her as important for the judgment of a world.

Asami would later bully people around Musashi into giving her money, which led to her meeting the main cast again. She was scared off by Mois appearing before her while mimicking her appearance, before announcing the end of the world. Asami sees the alien as a doppelganger that would indicate her death and runs away scared.

Asami still appears several times afterwards carrying the same aggressive arrogant attitude she had in her debut appearance, although not causing as much trouble. Later, still a high school student, She eventually leaves her image behind, stopping dyeing her hair and tanning, going for a more mature natural look.

Asami practiced martial arts since she was young becoming a renown fighter. However, that ended up leading to her being involved in street brawls that gave her a bad reputation. She fought to protect her friends Daisuke and Yuki, but she was abandoned by them afterwards. It was during this event that Mois chose her to be her human model for the courage she had to protect her friends even standing alone.

Sometime later, Asami was picking up fights with people and scaring them into giving her pocket money, which leads to her meeting Mois again. In the anime, after meeting the girl identical to herself, and even an illusion where many other clones appeared, she's convinced to leave her life as a delinquent behind and try to make peace with her parents and go back to how she used to be before she became involved with street gangs.

Near the ending of the anime, Asami reappears as a student who fears she won't make it past university entrance exams. Mois notices her worries and decides to help her study for them. They bond while studying together and eventually Asami succeeds.

Asami when she was a kid. 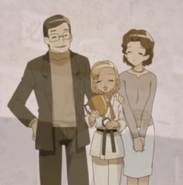 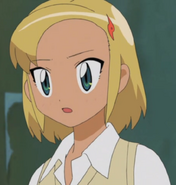 Asami and Mois, the later using a modified older version of Asami's appearance