Babubu (バブーブー, Babūbū) is a baby Space Cuckoo that appears in the Keroro Gunso anime.

Babubu first appears when Keroro wakes up one night and sees a little bump under his covers. When he lifts the covers and he sees a baby, but he falls back to sleep. The next day he shows the platoon the baby, naturally Angol Mois and Tamama are not happy about him. Keroro is then tasked with watching the baby, later named Babubu. Keroro at first has some troubles, but thanks to Fuyuki and Natsumi Hinata, he learns to love Babubu. Babubu, in turn loves him, calling him Mama. He later grows to an enormous size due to his real species, which is revealed to be a Space Cuckoo, after his pacifier is glowing, ready to evolve. According to Kururu, Babubu is actually a Space Cuckoo from the planet Nikko, and is a Shrewd-type space creature that impersonates a child of another alien race so they will raise it.

In his Keronian form, he is very simplistic. He has mint green body with a pink pacifier attaching to his mouth (its still attaching when his mouth is open). 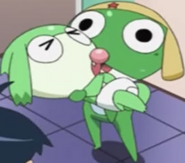 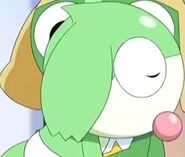 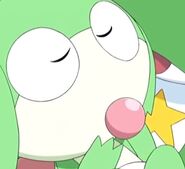 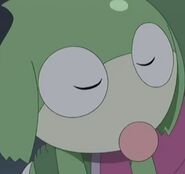 This article is a stub. You can help the Keroro Wiki by expanding it.
Retrieved from "https://keroro.fandom.com/wiki/Babubu?oldid=47259"
Community content is available under CC-BY-SA unless otherwise noted.