Baio Nishizawa (西澤 梅雄, Nishizawa Baio) is the husband of Oka Nishizawa and the father of Momoka Nishizawa. He is the head of the Nishizawa Corporation in the series Keroro Gunso.

Baio is Momoka's father and lavishes on his daughter as much as he can, though he will not give in to her in an argument. Baio is also head of his own private security force, both assigned to him and Momoka, though his seem to be the superior of the two. Despite being rich enough to not need to, Baio is an extremely strong martial artist, having defeated both Paul and Oka in tournaments before they would become part of his life (Paul as his family's butler and Oka as his wife).

Baio is a very strong tactical leader, said to be absolutely ruthless and cold-hearted. Unlike the rest of his family, Baio does not have a split personality (though one time Momoka actually got his by accident in an experimental accident as a third personality for a short time.)

Baio Nizhizawa's only daughter and heir to the Nishizawa Corporation. He loves Momoka very much, as evident by when she was younger. He appeared to be their more for her when she was younger, as opposed to Oka, and even now he still wishes for her to be with him. Even sending his elite guards just to have Momoka come with him to Scotland.

Baio's wife. When they were younger Oka had thought of Baio negatively, thinking he would be defeated just like the rest of the men who fought for her hand. However, in a surprising turn of events Baio chained Oka's hands together and they then married. They later gave birth to a little girl and when Momoka was younger they stayed with her and were pleased to see that she loved both fighting and being lady-like.

Paul and Baio were once rivals, fighting to see who would be the best. Paul had lost and later became his familiy's butler and Momoka's main bodyguard.

While Baio sees Fuyuki neither as a rival or a friend, he has apparently accepted him for a candidate of Momoka's love.

While they have yet to interact directly, Baio knows of Tamama's presence and he has accepted him as a guard to Momoka. 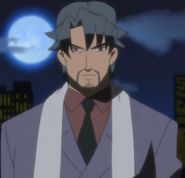 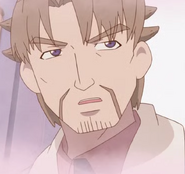 Baio on the cover of the Keroro Special Miracle Pack.

Baio as drawn by Paul.