Bariri (バリリ, Bariri) is a minor but reoccurring character in Keroro Gunso. He is a warrant officer (准尉, Jun'i)[RANKS] and leader of the Bariri Platoon.

Bariri has a rather simple and normal behavior, not nearly as imposing as other high ranking members of the Keronian army shown in the series. Whenever Pururu is mentioned, he loses focus on anything else, causing problems for himself and everyone around him. After his initial appearance, he became fond of using fruit to express his feelings, something that never worked very well for him. His therapist has instructed him to use food terms to move on from his love for Pururu, and everyone around him tells him he's been scammed.

Bariri fell in love with Pururu after having an arranged marriage interview with her in Episode 239-B of the anime. Pururu did not love Bariri and didn't want to marry him, but the Keroro platoon had no idea about that and attempted to help her. The platoon went to where she was having her marriage interview with Bariri, trying to make her sound incredible to him. Bariri was impressed, falling deeply in love with her.

Afterwards, he shows up several times. In Episode 262-A, it's revealed that, after being rejected by Pururu, he went to therapy and was told to explain his feelings in terms of fruit. However, even with treatment, he couldn't forget Pururu. He was distracted during an operation and ended up injured alongside his platoon. They went to Earth and received medical treatment by Pururu. After some insistence, she accepted a gift from him, just to be buried in them later due to his obsession.

In episode 320-B, the Keroro platoon attempted to help him again. Due to his love for Pururu and her rejections, he was unable to eat anything and work for the army. Using a human-like android as a disguise, he attempted to meet Pururu (in her Pekoponian suit) in a marriage interview for humans. However, he was rejected, and, after some insistence, Pururu learned his real identity, rejecting him again and walking out.

Aki Hinata saw his situation and tried to console him saying that sincere feelings would be able to reach Pururu, but, first, he should take care of his own health problem first. Bariri is moved by her words, and decides to leave, ready to recover. However, when he's about to leave, Pururu goes after him. She says that she was sorry, and tells him that she wants to go out to a dinner with him... However, he tells her that he needs to cure himself first, leaving a surprised Pururu behind when he left the planet.

In episode 344-A, Pururu tells everyone that she was invited by Garuru to help on a mission on another planet and tells them that she was leaving Pekopon. Later when the Keroro platoon was having a meeting about Pururu's departure from Pekopon, Bariri charges in and cries because he found out that Pururu was leaving and wants Pururu to stay in Pekopon. He says that's why he's the way he is when it comes to Pururu. He cries and explains on how the planet that Pururu will be on will be far away from the planet that he's staying on Planet Zawakotoro. He started to explain how he feels about her in terms of Japanese-Chinese foods instead of fruits this time. He tells the Keroro platoon on how he had tried many times to tell Pururu on how he feels but fails every time and that his feelings were not enough. So Keroro feeling sorry for Bariri tells him that he gets it and says that Pururu will stay because she's grateful to them but Giroro tells Bariri that he does not agree with that and says that separation from the battlefield is inevitable and reminds Bariri that he's a soldier and that it's important to accept this type of separation. Bariri agrees but his heart was broken so Keroro frantically tells him to cheer up and tells him to just do what he can. Bariri said yes but he was depressed. So later on at Pururu's farewell party, Keroro tries to help Bariri out again by creating a video for Pururu of memories on Pekopon but... it showed Pururu's only wrinkle. Everyone was shocked and Keroro realized that it was Kururu's fault for doing that and Pururu was furious. So Keroro tries a new plan of memories of Pekopon foods and even though Bariri was concerned about this plan, Keroro tells him that he arranged everything and that this time it'll work. But the meal consist of Gunpla in ramen and it turned out to be bait for animal luring. Kururu made his dish of jumbo curry in the tub but after knowing that he bathed inside it, no one eat it. Momoka Nishizawa sent a huge cake but it was meant for Fuyuki since Pururu said that it looks different for some reason since there was a cake figure of Fuyuki on top. Finally, when it came for Bariri to say his farewell speech, he trembled and had a hard time saying it to Pururu. Natsumi noticed that he looked nervous but Aki Hinata was cheering him on to do his best. So he said her name and drops his speech and slips on Keroro's Gunpla-Ramen and got it all over him. He got burned all over and started panicking and jumping and running around with snot coming out of his nose. Everyone panicked and screamed. As Bariri lunges at Pururu, Pururu brings out her weapon and gives him a shot to calm him down and stopped all of this. Later, when Pururu was fixing everyone up, Bariri finally realized that he had never seen on how charming Pururu's face is and walks away. So later when Pururu finally leaves Pekopon and goes on her ship, he was sad but didn't say anything. Giroro noticed this and tells him a beautiful philosophy (after she left and everyone was going back in the house) and said that separation was an important thing but nothing like a separation from a battlefield takes a toll on the heart and give his apologies for Bariri's loss on victory. Bariri was stunned at his words and decides that he must tells Pururu his feelings and goes after her ship to express his feelings to her with his heart and again comparing it to food. When Pururu was driving, her ship showed her something and she was shocked to see Bariri's ship behind her along with Bariri in a spacesuit standing on the ship looking cool. He moves his ship closer to hers and as he gives her a thumbs-up, he jumps off his ship and goes towards her screaming his name as he goes...saying I Love You slowly while she calls him an idiot...and gets knocked over by another alien's spaceship. Pururu gets out of her ship and flies towards him in her spacesuit and saves him while he was floating through space feeling good about what he did and loses consciousness. Later, he wakes up on a bed and sees Pururu sitting beside him and asked if he was okay. He asked her what happen and she smiles and explained what happened. He asked her when his injuries are better if he would take her out for a meal and she makes a request to tell him to stop comparing things to food and then she would go out with him. Shocked but happy, he said that he would and was about to compare something again but Pururu stops him and he apologizes while blushing. Pururu starts to laugh and he joined her and started to laughed too. Finally, he got to have a meal with her but... his request to stay on Pekopon was denied by Keron Headquarters and he was sent to another planet that was farther from Pekopon with him crying out Pururu's name leaving her sighing after him in a tired way. Poor Bariri.. 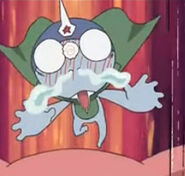 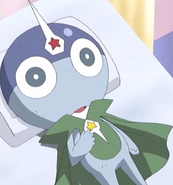 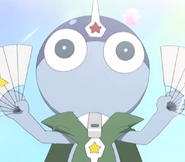 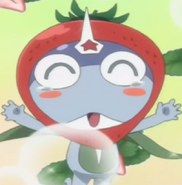 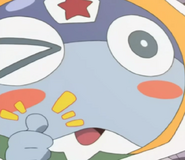 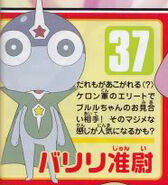