His powers are originally made in the "Age Of Destruction", mentioned by Shivava, he is also one of the most enigmatic Keronians.

He first appeared in volume 23 of the manga, then again as a mini figure in Keroro Land 40. Though most of his history is unknown, though it's suspected that he is the first attempt of making Shin Keroro that failed.

In his debut he battles against Shivava near the end of the chapter, "The Two Keron Stars", and won. He appeared in the continuous chapter, "An Ancient Power", and defeated Keroro easily, but he later lost against Shin Keroro and Myou Kaneami.

Black★Star is a mysterious child in prison on an asteroid, but later he emerged due to being accidentally released by Shivava. Not much is known about him, but he appears to be Shin Keroro's archenemy.

After Keroro's defeat, Shin Keroro's past is revealed that he chose the Keroro Platoon and have their styles. Shin Keroro ends up releasing a large energy, which paralyzes Black★Star. Black★Star awakes inside some sort of broken television-like dimension (Electric Spacemind), he discovers a shadow figure (Shin Keroro himself), telling him that terrible things will happen or if he doesn't leave Black★Star awakes from this odd power, which surprise Shin Keroro. He was critically damaged after the battle with Shin Keroro, as he leaves from Pekopon, as Shin Keroro gain his victory.

He appears to be simplistic. He is also an evil version of Shin Keroro, the only difference is he's mostly black, he also has two black long pigtails resembling rabbit ears. He also wears blue rings all over his body (around his wrists, neck, and pigtails) reference to Shin Keroro wearing a round ring as collar and wearing a bracelet. His eyes are shaped semi-circle and his irises are colored with red to yellow gradient, around his pupil is a black ring, making it resembling a bullseye, and sharp teeth are seen when his mouth opens. He also has round tail much like to Shin Keroro's and Sumomo's. His symbol is a black star (hence his name) but its inverted, opposing to Shin Keroro's Keron Star and its normal position.

Black★Star is very wicked and intelligent but he was also calm and collected. Later, as he became even more maniacal, and even more brutal in the process. Despite this he is constantly put in trouble, leading Shin to have to save him.

He is a very powerful Keronian, developing to have dark magic-like abilities. He forms dark energy around his hands with tiny white runes (some resembles Keron alphabets) surrounding him to stop time and space except people who are already seeing aliens (Tomosu is also stopped in time despite he sees an alien like Shin Keroro). He also use other powers such as telekinesis, dispelling styles, and shadow-like tentacles. He can also communicate with Shin Keroro using telepathy. He also developed to have an enhanced strength, example he stopped Shivava's baton from attacking him with only one bare hand.

In the manga Volume 24, he stole Shin Keroro's bracelet, making him useless to battle and he was able to transform into styles but does not change his skin color schemes unlike Shin Keroro does.

A keychain figure of Black★Star, with his name and official artwork revealed. 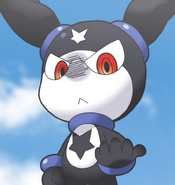 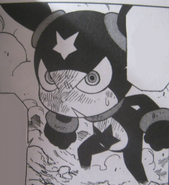 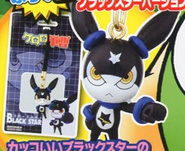 Retrieved from "https://keroro.fandom.com/wiki/Black%E2%98%85Star?oldid=47439"
Community content is available under CC-BY-SA unless otherwise noted.