He appears in the episode where Keroro directs a movie but Keroro's boneheaded decisions caused the Platoon to quit leaving them without the finished movie but instead a reel of failures which Chibaba ends up producing as a successful documentary in the end. 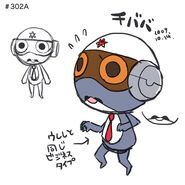 Chibaba's reference sheet.
Add a photo to this gallery

Retrieved from "https://keroro.fandom.com/wiki/Chibaba?oldid=36711"
Community content is available under CC-BY-SA unless otherwise noted.