Giroro has the basic look of most tadpoles and is red in color. He wears a maroon hat with his skull symbol on it. This symbol on his hat and belly are yellow. Also very cute.

Keroro is one of Giroro's friends. Keroro and Giroro are really close friends, despite quarreling more often than agreeing. Giroro usually deals with Keroro messing up his stuff, and usually scolds him when he is being selfish. This relationship continues on when they are older.

Pururu is one of Giroro's friends, Giroro had a slight crush on her, but has since grown out it. He also seems to save Pururu a lot too. Pururu herself seems to appreciate Giroro's help.

Joriri is one of Giroro's friends. He appears to look up to him, and when Giroro is older he laughs back at his memory of Joriri. 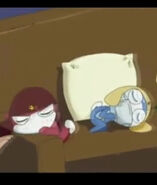 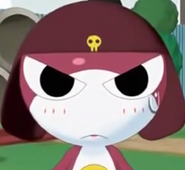 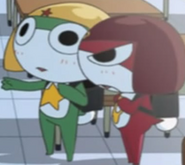 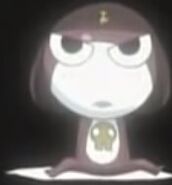 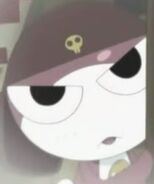 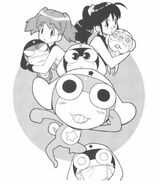 Chibi Giroro as drawn by Mine Yoshizaki

Add a photo to this gallery
Retrieved from "https://keroro.fandom.com/wiki/Chibi_Giroro?oldid=43585"
Community content is available under CC-BY-SA unless otherwise noted.