Chibi Momoka (Or just young Momoka) is Momoka when she was little. She was first seen in episode 282, and appeared in episode 328.

She first appears in episode 282 of the anime when she is transferred to a new school. She is very nervous, and when everyone is talking about her she feels very lonely. However when she sees Fuyuki she instantly falls in love with him. After Fuyuki shows her to class, she harbors a crush on him, and even starts to get into Paranormal stuff to impress Fuyuki. Later on it is shown to be Momoka's birthday, and she manages to save Tamama, after he is caught by a Andromedian retreiver. She turns into Brutal Momoka for the first time, and Paul notices how much she acted like her mother.

Chibi Fuyuki-They first encountered at school when Fuyuki bumps into her on accident while reading his alien book. They introduced themselves to each other and then Fuyuki tells her she had gone to the wrong way to class. Fuyuki then leads her to class holding her hand. Thus, Momoka fell in love with him and still loves him today.

Tamama-Tamama and Momoka first met when Tamama went to Momoka's party to eat some cake. Then gets attacked by a Andromedian retreiver. Momoka then helps Tamama by fighting the dragon with super strength. After Tamama is saved, Momoka asks him if he would like to stay at her house. Tamama didn't refuse and was happy to stay.

Baio Nishizawa - Momoka's father. Momoka wishes to spend more time with him, though he is much to busy with paperwork.

Oka Nishizawa - Momoka's mother. Momoka wishes to spend more time with her, but she is always busy training, however if her daughter really wants to see her she will go her ways just to see her. 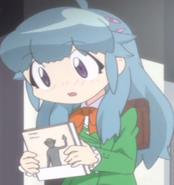 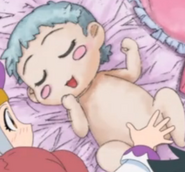 Momoka as a baby.

Chibi Momoka as drawn by Mine Yoshizaki

Add a photo to this gallery
Retrieved from "https://keroro.fandom.com/wiki/Chibi_Momoka?oldid=41864"
Community content is available under CC-BY-SA unless otherwise noted.