Chibi Natsumi (ちびなつみ also known as Young Natsumi) is Natsumi when she was young.

In Keroro movie 2 she was shown a lot. In that movie she got lost and then cried but later in the movie when Evil Meru was on, it shown that she was found by her mom, Aki and her younger brother, Fuyuki. In the show, a lot of times she will be shown in the past. One of them was her playing with Fuyuki but then Fuyuki gets mad. Sometimes she can be hit by the "If I Could Do My Life Over". But when humans get hit by one they will act like a kid. One time when she got shot by the gun she cried but later Giroro found her.

Her personality is much more tame and non-violent, and she is actually very sad or scared in most of her appearances. She looks exactly like Natsumi except smaller, childish, and with smaller pigtails.

Natsumi and Fuyuki with there dad. 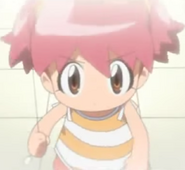 Chibi Natsumi as drawn by Mine Yoshizaki

Retrieved from "https://keroro.fandom.com/wiki/Chibi_Natsumi?oldid=46879"
Community content is available under CC-BY-SA unless otherwise noted.