Pururu's friends are: Keroro, Giroro and Zeroro (Dororo). She's the only female in the group. Pururu became furious with Keroro when they got stuck in the Kero Ball in Chibi Kero: Secret of the Kero Ball!?. Also she had Nuii with her when she was a child. Giroro used to be in love with her before Natsumi when he was a child, Keroro still loves Pururu to this day. Pururu may look like a tadpole now but this is how the creator draws female adult Keronians.

Although her parents aren't shown, when Pururu and Keroro were trapped in the Kero Ball she is shown crying for her mother.

Pururu has lavender skin and her hat is flat with a pink color and a flower on it. Pururu has a yellow and pink heart symbol on her cap and belly. She also has big purple eyes.

Keroro - Keroro had a huge crush on her and still has it today. Keroro is one of Pururu's friends. Pururu got mad with him the first time they met, but despite that she tends to view him as a friend.

Giroro -  Giroro is one of Pururu's friends. Giroro used to have a crush on her, but he grew out of it when he got older. Pururu sees Giroro as one of her closest friends, thanking him for all the times he has saved her and the others from danger.

Joriri -  Joriri is one of Pururu's friends. Joriri helped the group with conflicts and tried to get their childhood secret base back in episode 162 when a trio of Keronian bullies hijacked it. Also before any one knew he was in the base Keroro made snacks for Pururu and he ate them all without anyone knowing. 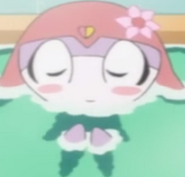 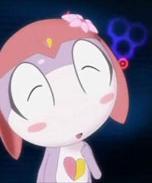 Chibi Pururu as drawn by Mine Yoshizaki

Add a photo to this gallery
Retrieved from "https://keroro.fandom.com/wiki/Chibi_Pururu?oldid=49300"
Community content is available under CC-BY-SA unless otherwise noted.