The unnamed Class 2-A Homeroom Teacher (2年A組の担任の先生, ninen eigumi no taninnosensei) is a teacher at Kissho Academy. She teaches Natsumi Hinata's and her friends' classes, and also trains various of their sport teams. She only makes a couple of appearances in the manga, but has a sizeable number of appearances in the anime, making appearances up to the last season of the show's original run[1].

2-A's Homeroom Teacher appears to be a patient and kind woman. However, she does enjoy jokes, such as planning to use the swimming time trials records to "tease the slowpokes". She was also the first to congratulate Natsumi on setting a new speed record for swimming. In the anime, she later visited her house to have a parent teacher conference with Natsumi's mother, Aki Hinata.

2-A's Homeroom Teacher has grey eyes and brown hair done up in a ponytail with a pale pink or peach colored scrunchie. For teaching she wears what appears to be a cream colored blazer over a periwinkle top and a short grey skirt. For teaching P.E., she wears a blue-gray tracksuit with white stripes and her whistle. For swimming lessons, she wears a a dark-grey high neck one-piece bathing suit and a whistle. She also wears large glasses.

In the manga, she appears for the first time coordinating the joint swimming class, which gathered Kissho students from multiple years and classes, including Momoka's Class 1-B and Natsumi's Class 2-A [2]. Afterwards, she can also be seen coordinating physical education for Natsumi's class[3].

In the anime, she is introduced much earlier. She first appears when Keroro, on the hunt for the rest of his platoon, interrupts Natsumi's gym class by posing as a volleyball[4]. She watches in awe as Keroro bounces around like crazy before falling to the ground and rolling back to the window. Afterwards, she'd go on to make multiple appearances both teaching in class and coordinating practice of various sports for Class 2-A.

The closest she ever gets to involvement with the main plot is during a home visit, when the Keroro Platoon attempted to replace Aki Hinata, who was busy at the time[5]. They initially use Pekopon suits, and afterwards Dororo uses a ninja technique to make them perfect copies of Aki. She meets the real Aki at the same time though, and accepts the explanation that the other false Aki were just family.

In the 6th season, an unnamed chemistry teacher who looks very similar to Class 2-A's Homeroom Teacher appears. She has darker hair, doesn't wear glasses and has green eyes, but her lineart seems to be the same as the homeroom teacher's, although she wears a lab coat over her clothing. She takes Natsumi to a chemistry class[6] in a lab, which almost ends up in disaster due to Natsumi's paranoia regarding Kururu's presence there.

In spite of her physical similarities, she seemed to be easier to anger than the homeroom teacher and is likely meant to be a separate character.

2-A Homeroom Teacher in the manga.

2-A Homeroom Teacher talking to Natsumi in the manga. 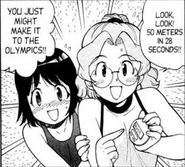 2-A Homeroom Teacher congratulating Natsumi for a new swimming speed record in the manga. 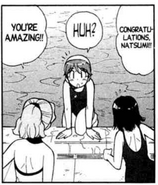 2-A Homeroom Teacher's first appearance in the anime.

2-A Homeroom Teacher in formal clothes.

2-A Homeroom Teacher in her bathing suit.

2-A Homeroom Teacher talking to Natsumi in the anime.

2-A Homeroom Teacher congratulating Natsumi on a new swimming speed record in the anime.

2-A Homeroom Teacher from the back in her normal clothes.

2-A Homeroom Teacher from the back in her bathing suit. 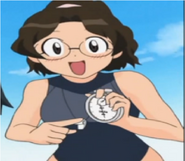 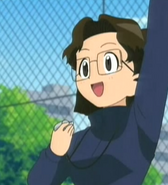 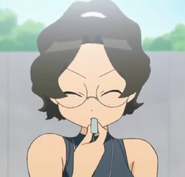 The Chemistry Teacher showing her annoyance at Natsumi.
Add a photo to this gallery

Retrieved from "https://keroro.fandom.com/wiki/Class_2-A%27s_Homeroom_Teacher?oldid=49224"
Community content is available under CC-BY-SA unless otherwise noted.