Colonel is a recurring character in Keroro Gunso. Initially known only as Commander (指揮官, shikikan), he is later more specifically identified as a Colonel (大佐, taisa), although his actual name hasn't been revealed.

Although he is clearly an unique character in the manga, the anime staff didn't seem consistent with his portrayal seemingly taking him as a generic superior command figure, rather than a specific character with consistent voice actor.

This unnamed Keronian Colonel is Keroro's direct superior regarding Pekopon's invasion, making a few appearances throughout the manga and anime. He also seems to be the current commander of the Grand Star, after Obaba's retirement.

He first appears in the manga after Keroro's first Christmas, where Keroro convinced his superiors that invading during Christmas would be a mistake due to the high spirits of the Pekoponians at the time, which would lead to tougher resistance.

Later, he would be involved in a supposed health check up of the Keroro Platoon. In the anime, this is his first appearance and a friendly misunderstanding that turned out to be just a health check up, but in the manga it turns out that he did intend to remove Keroro from invasion duties. Analyzing him, Keroro had a Psychiatric load value 100 times greater than an average Keronian, but even that was only about half of a human. Musing about that, the Colonel believes that it's the reason Pokopen has remained as an independent neutral ground and invasion might be fruitless.

However, Kururu, with Garuru's help, rescues the platoon and brainwashes the Colonel and his subordinates to forget that idea and allow them to continue the invasion. The Colonel and his subordinates actually avoided the brainwashing, but seeing the platoon's resourcefulness and willingness to carry out the invasion, the Colonel approves their return to Pokopen. Some time later, Colonel ordered Garuru to take on a secret mission to eliminate a Kiruru unit which reactivated in the distant planet Altea 7.

Much later, the Colonel sends a "gift" to the Keroro platoon to raise their spirits through a battle during Christmas, Kiruru version X-55. This is the first and only time where he's actually credited as Colonel in the anime rather than treated as a generic superior commanding figure.

He wears a hat similar to Keroro's and also a cape. In his early anime appearance, rather than that he sports a metallic hat similar to the one of Keroro's Father. He is always covered in shadows, so any details about his color and emblem are unknown. 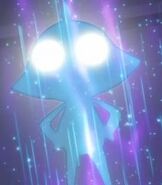