Criminal 303 is a character in Keroro Gunso.

Criminal 303 is an evil alien that likes to possess others' bodies and eat as much as he can. According to the Space Law, the possessed one would be responsible for paying the economical loss caused by 303.

On Earth, he secretly possessed Keroro and used his Anti-barrier to steal food from multiple stores. The Keroro Platoon (including Fuyuki) mistook him as #303 until Poyon appeared and revealed the real criminal. While the case seemingly ended, in the end, Keroro was forced to pay for the economical loss due to being 303's recent victim. 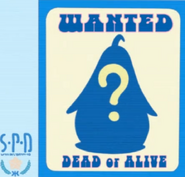 Add a photo to this gallery
Retrieved from "https://keroro.fandom.com/wiki/Criminal_303?oldid=45840"
Community content is available under CC-BY-SA unless otherwise noted.