Dark Keroro (ダークケロロ, Dark Keroro) is the main antagonist of the anime movie Keroro Gunso the Super Movie 3: Keroro vs. Keroro Great Sky Duel de arimasu! which is based on the series Keroro Gunso.

Dark Keroro is a clone of Keroro, with some variation in appearance. He leads the other Keronian manifestations, Shivava, Doruru, and Miruru. He was cloned by the third generation Kiruru.

He is in fact a newly-uncovered Kiruru in the mountaintop city of Macchu Picchu, Peru. Grown from a sample of Keroro's DNA that was taken off the Kero Ball (during the same time where Miruru awakened). He leads the other Keronian manifestations, Shivava and Doruru. At the end of the film, Miruru sacrifices herself to seal the Kiruru half of Dark Keroro, putting an end to his malevolent intentions. Ridding of his violent ambitions. Dark Keroro makes up what his counterpart lacks and heads off into space to try to conquer a different planet. However, his plans are thwarted by alien look alikes of Fuyuki and Natsumi in an intentional parody of the start of the series.

Being a replication, Dark Keroro resembles his original, with some differences. His natural skin color is dark green and his lesser skin color is pure black. His pupils are red and his hat is gray. His hat star symbol is also pure black. There are black stripes under his eyes. He wears a torn red cape, making him slightly resemble a vampire due to the fangs and eyes.

At the end of the movie, his eyes turn black and his cape disappears, leaving only a red neck scarf.

Dark Keroro is a much more "improved" Keroro. He is a much smarter and more serious invader than Keroro, and successfully dominates Pekopon in 2 minutes, using a mind controlling device. He is equipped with a massive, much more improved version of the Keroro Robot(keroro statue). He commands a gigantic spaceship with an anti-barrier that enshadows inner Tokyo. the anti-barrier is taken off once the world is literaly bowing down to him. and once the Keroro Robot is complete the ship is put onto its back, representing small wings which says how big the Keroro Robot is. 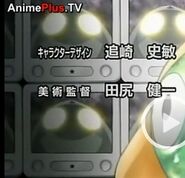 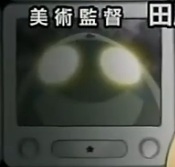 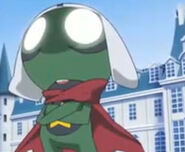 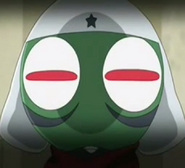 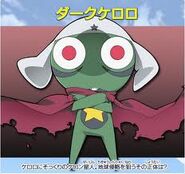 Dark Keroro being hit by Keroro and being called a "bastard"

Add a photo to this gallery
Retrieved from "https://keroro.fandom.com/wiki/Dark_Keroro?oldid=51004"
Community content is available under CC-BY-SA unless otherwise noted.