Dokuku was turned into gas in an experiment. He appears in the Hinata house in episode 177 and is initially mistaken for a ghost. It appears that his primary objective is to free Giruru from the Keroro Platoon.

Due to his ghost-like appearance, Keroro and co. (except Fuyuki) were easily frightened by him. When he actually just arrived to free Giruru by possessing Tamama, after Giruru was free, he and Dokuku are revealed to be brothers, and Dokuku told his brother to quit and go back to Keron because he was not being paid enough. Dokuku now possessing everyone as apologies, and chasing Natsumi to apologize to her at the end of the episode.

Being in a gas form, Dokuku can freely levitate and phase through cracks and holes. He can use his scythe hand as a weapon as well the fire ball. Oddly his scythe hand is white in the anime, everywhere else it is a brightish gray. He can also possess people by entering them through their butt, and he seems to enjoy doing it. Also, the only way he can communicate is by possessing people, otherwise he can only say "doku".

How he appears in the anime. 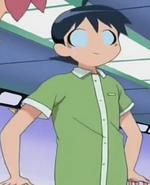 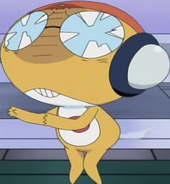