Start a Wiki
Dolphin (イルカ, Iruka) is a character featured in File 013 of the series Keroro Gunso and related media. Dolphin is also featured in Chapter 190 of the manga.

Dolphin first appeared after getting let in by Angol Mois after she pulled a lever to hard. Keroro decided to keep him. When Natsumi came down to Keroro's Base , after Shin accidentally told her about him. Shin and the Dolphin instantly connect as Shin decides to help the Dolphin go back to his home. 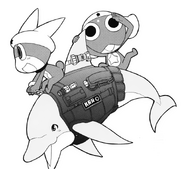 Add a photo to this gallery
Retrieved from "https://keroro.fandom.com/wiki/Dolphin?oldid=44899"
Community content is available under CC-BY-SA unless otherwise noted.