Dororo (ドロロ, Dororo), formerly known as Zeroro (ゼロロ, Zeroro), is a main character in the anime and manga series Keroro Gunso. He is of the rank Lance Corporal (兵長, Heichō)[RANKS] and he is a part of the Keroro Platoon. Although he used to be one of the best assassins in the Keron Army, he went native upon arrival on Pekopon and chose to become a ninja and protector of the planet.

Dororo spends most of his time training, meditating, reading, doing nature-related works, or spying on the actions of his Platoon and others. Dororo is often forgotten by the rest of Keroro Platoon, causing his 'trauma switch' to turn on (his biggest fear [see Episode 123]). This usually leads to him sitting in a corner to cry, quietly reeling off many bad experiences to himself. This only occurs in the anime.

There are two people that do not regularly forget about Dororo: Koyuki, one of his best friends, and (ironically) Zoruru, the psychopathic maniac who has fixated on Dororo and vowed to kill him.

Dororo will not participate in plans that are potentially harmful to people's feelings or nature. He is extremely stubborn about it, as he desires to bring peace to Pekopon.

Even for all he has gone through, Dororo is a very kind, generous, and respectful person.

Dororo is a light blue Keronian. Throughout his childhood, he wore a medical mask, possibly due to a weak immune system. Before, he wore a white, military uniform-style hat like the other Keronians; after becoming a ninja he began wearing a white cap with shrouds in place of flaps.

The symbol on his forehead is a red, four pronged shuriken while on his chest is the same symbol but yellow. When he was an assassin, he wore a gas mask. As a ninja, Dororo dons a ninja mask and sheath for his Katana strapped to his back. Dororo's afro is light pink. Dororo is 55.5 centimeters tall (1'8 feet).

Young Zeroro, although member of a large and wealthy family, was a demure, weak, and shy child, who initially was unable to make friends at school. So, when Keroro approached him, wanting to become friends, he instantly became attached to him. Zeroro almost seemed incapable of independent thought, as he always leeched off of Keroro and Giroro. He did not like to do dangerous or forbidden things but often went alongside his friends anyway, as he was not yet stubborn and possessing strict morals like he has later.

Later on, Pururu, the class beauty, also joined their group. He was often exploited by his friends, mainly Keroro. Throughout their friendship, Keroro used Dororo for his own personal gain and was often insensitive to Dororo's feelings. Despite this, they remained close friends.

Zeroro graduated from the Keron Military Academy under the rank of lance corporal. He worked as a part of Jirara's assassin corps, the X1. Zeroro was eventually chosen as the number 1 Assassin, but that meant, according to Jirara, that he couldn't become a true Master Assassin, since the fame of that position goes against the nature of an assassin who is meant to blend into the darkness and be forgotten by all.

He was later assigned as a part of the Keroro Platoon alongside Giroro, Tamama and Kururu. They were given the mission to conquer Pekopon.

When the platoon landed on Pekopon and were scattered, he somehow managed to get himself caught in a bear trap. He promptly accepted his inevitable, lonely death until he was saved and taken to the ninja village by the kunoichi Koyuki Azumaya, where he learned the way of the ninja. In the anime, Zeroyasha, Koyuki's friend dog, found him in the trap.

Zeroro renamed himself Dororo after the forest he was rescued in, and rejoined the Keroro Platoon. His respect for Koyuki saving his life changed his mindset about invading and instead made him feel as if Pekopon should be respected as any other planet.

Dororo uses the archaic sentence-final particle "de gozaru", a form of 'desu'. Dororo refers to himself as sessha, an archaic male form of "I", primarily used by samurai.

In general, Dororo uses 'humble' Japanese speech. Generally, one would only use this humble form when addressing superiors. Dororo takes this to the extreme and uses humble forms of speech in almost every sentence, regardless of who he is talking to.

A form taken by Dororo through the Earth Style Transformation Technique (地球式変化の術, Chikyuu-shiki Henge no Jutsu). It can only be retained while the user keeps their concentration.

Demonic Arts (鬼式, Oni Shiki) also known as Assassin Soldier Close Combat Battle Mode in the manga. It's introduced in chapter 125, volume 15 of the manga, appeared in chapter 140, the 5th movie and episode 336. Demonic Art encases Dororo in armor and equips him with a long sword as opposed to his traditional short sword.

During the fourth movie, Shion captured Dororo and with the power of the Dragon Book turned him into an ancient biological weapon of the Keronian army, a Dragon Warrior, intended to protect the Earth Dragon during its birth. In Dragon form, Dororo has large teal wings and wields a giant katana. Later in the TV series, with Kururu's help, he takes this form out of his own will to protect the universe from dark matter dragons.

Makoto is introduced as a singing dancing idol invader, member of the Operation

Also known as Dororo Girl Type. The female human form taken by Dororo due to the effects of a mysterious substance known as Sandstar in a collaboration with the original Kemono Friends mobile game. Aside from physical appearance, voice and personality also change. Her voice actress is Juri Nagatsuma. Dororo speaks in a feminine, although still old fashioned way, and her trauma switch manifests in aggression towards Keroro, rather than just depression.

In the Handsome Keroro Gunso Invasion Operation, a collaboration with the Smiral merchandising label, the Keroro platoon become handsome men due to an invention created by Kururu in order to become popular with girls to obtain more invasion funds.

Whenever Dororo needs to communicate with the rest of the platoon, he uses a shuriken made of paper that always seems to embed itself into Keroro's head. Dororo usually does not need to be nearby to perform this.

Dororo's trademark abilities. He can manipulate his energy to his advantage. These only appears in the anime. 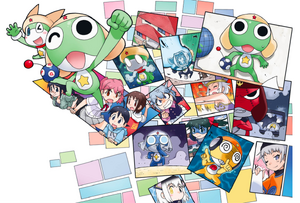