Dororo's Mother (ドロロの母, Dororo no haha) is a character in Keroro Gunso. She is the mother of Dororo and his younger brother.

She is a very sweet and kind female Keronian who cares deeply for both of her sons, and his friends. Although she is very sweet and kind, it is rare to see her in any kind of fight, but she uses household kitchenware as her main tools of combat-mostly a pan and spatula.

She is also mentioned by Chibi Keroro to be a very skilled and powerful assassin.[1]

She is married to Dororo's father who is a very rich Keronian. It is possible that Dororo's parents are medical specialists which might explain why he donned a medical mask in his childhood. In addition, Dororo's father travels on planetary missions frequently, and is probably well-known among many planets.

She seems to be somewhat of a skilled ninja. In episode 109, she defeats the train food salesrobots by using her pan and spatula. 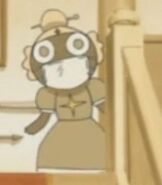 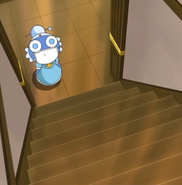 Retrieved from "https://keroro.fandom.com/wiki/Dororo%27s_mother?oldid=47433"
Community content is available under CC-BY-SA unless otherwise noted.