Doruru (ドルル, Doruru) is an antagonist in the anime movie Keroro Gunso the Super Movie 3: Keroro vs. Keroro Great Sky Duel de arimasu!, which is based on the series Keroro Gunso.

Doruru is a member of Dark Keroro Platoon's Keronian manifestation empire, alongside Dark Keroro and Shivava. Giroro remembers him as one of his old brigade's fiercest soldiers. In the end, Doruru is defeated with Giroro and Natsumi's combined efforts. He doesn't say full sentences when talking, instead, he uses one or two words.

Doruru is a blue full-grown Keronian. He has black bags under his eye sockets and the center of his sky blue hat is pointed downward until flattening at the end. The ears of his hat are pointed out and carries double-barraled guns. He wears cannons on his arms and hat. His symbol is a yellow phi symbol.

Doruru can levitate with a jetpack. He can also use his cannons, lasers, and others to attack.

Doruru is a former trainer of the Keron army but was fired after disobeying orders during a mission. 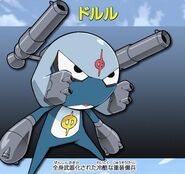 I don't think the color was like this but oh well.

Add a photo to this gallery
Retrieved from "https://keroro.fandom.com/wiki/Doruru?oldid=50532"
Community content is available under CC-BY-SA unless otherwise noted.