Firuru is a sports doctor and the leader of Sporty.

Firuru is a dark blue, blue-eyed, soccer-loving Keronian. He wears bright green shoes and a bandana on his head that partially covers his eyes. He keeps a piece of tape or bandage across his nose. The symbol on his belly is a white star inside of a yellow circle. On his bandana, the symbol is the same with the colors switched. He is often seen carrying a white soccer ball with yellow stars on it.

Firuru's name most likely comes from the Japanese of field, fīrudo (フィールド). For this reason, his name can be spelled as Fielulu. 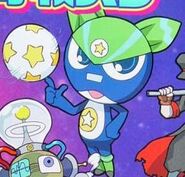 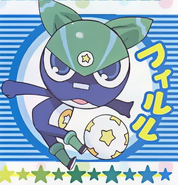