Fuyukichi looks like Fuyuki Hinata, which confused Keroro. Fuyukichi has fair skin, navy blue hair and gray eyes. Unlike Fuyuki his ahoge has a yellow bead towards the bottom. He wears a light blue hanten, with a pale red obi. He also has a towel wrapped around his neck and brown gloves. He wears light teal shorts and white boots.

He is one of the characters who lives on planet Sengoku, in a village ruled by Warrior Viper. He likes occult in every way. In the beginning of the Warrior Keroro series, he believes that Keroro and his platoon are the guardians who saved his planet. In the last episode, it is revealed that he was one of the guardians who saved planet Sengoku, but he was only reminded when his weapon came back to him. 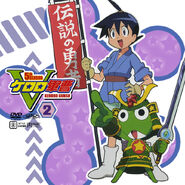 Fuyukichi with Keroro.
Add a photo to this gallery
This article is a stub. You can help the Keroro Wiki by expanding it.
Retrieved from "https://keroro.fandom.com/wiki/Fuyukichi?oldid=46358"
Community content is available under CC-BY-SA unless otherwise noted.
... more about "Fuyukichi"
RDF feed
Japanese name
冬吉 +
Romaji name
Fuyukichi +
Voice actor (Japan)
Tomoko Kawakami +