Start a Wiki
Geriri (ゲリリ, Geriri) is a major[RANKS] in the Keron Army. Also a new member of the force and described as an "elite specialist born from officals." He is the brainiac type of commander who perfers to be in Headquarters rather then be on the battlefield.

Major Geriri was sent by the Keron Mother Ship for results and to take charge. When he appear, he didn't arrive in person instead as a TV monitor. He bluntly accused the platoon's battle log too be pitiful along with their base, stunning the platoon; He demanded that Dororo would be resigned out of the squad due towards he's poor support on the invasion. The Keroro Platoon were against that command but he strictly order them to do so, reminding them of their position as soldiers or be sent back to boot camp, at last the platoon agreed. After Keroro sent Dororo away on "vacation", Keroro reported back to Geriri about Dororo fired. He was extremely serious about invading Pekopon and was willing to make sacrifices for his own pride. He ended up almost getting the Keroro Platoon killed, but they were saved by Dororo. Due to Geriri's error, he was stripped as commander of the Keroro Platoon. HQ found out about Geriri's actions when Kururu uploaded a video to Space YouTube of Geriri saying, "The mission ends when soldiers die in wars. It'll blemish my reputation if I fail."

Major Geriri is dead-serious commander who would rather discuss things he feels are important to his standards. He's very strict about his order and would use logic against the Platoon to follow his direct command even bribing them; Geriri strongly believes that soldiers in war must always follow a direct order and is willing to have a mission completed even if it means sacrificing his own subordinates to do so. He only cares about the invasion on Earth, his plans, glory and reputation, ignoring others concern or critical situation who are beneath his position as commander. 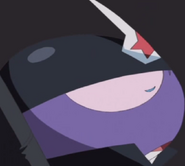 Add a photo to this gallery
Retrieved from "https://keroro.fandom.com/wiki/Geriri?oldid=41475"
Community content is available under CC-BY-SA unless otherwise noted.