Captain Geroro (ゲロロ艦長, Captain Geroro) is the main character of the fictional anime and manga series of the same name in Keroro Gunso.

The Captain Geroro fictional series is a clear parody and homage to the series Space Battleship Yamato and Keroro Gunso itself.

Captain Geroro is a manga edited by published by Aki Hinata and published by the magazine Shonen Alpha, with an animated series by Sunirase, as shown in episode 33 of the Keroro Gunso anime. Keroro usually skips more important things like army training for the tv show and, in fact, even Giroro has shown some liking for it.

Unlike its semi-counterpart from the manga, Chieftain Geroro, the anime has never directly shown that Captain Geroro was directly inspired by Keroro and the others, in spite of their obvious similarity, and at least two people working on it having met the Keroro platoon (Aki Hinata, as the manga's editor, and Kiko Katoyama, as the mecha designer of the animated adaptation).

Captain Geroro was first seen in episode 4, on the cover of a Shonen Alpha magazine that Keroro chose to read while Giroro and Tamama asked about the invasion. A more detailed look on it, alongside the other characters would only be seen in episode 26, when a chapter of the manga was late and Aki was forced to stay in the publisher helping the artists. However, it only was prominently featured as more than just a background element with episode 33 of the Keroro anime, which showed the launch of the Captain Geroro tv series.

Episode 66-A showed that Captain Geroro is dubbed for various planets throughout the universe, with Space Kumiko Watanabe voicing him for that version of the Captain Geroro anime, unlike his original dubbing, which is generally done by male VAs with deep voices.

In episode 80, Battle Chief Kiroro's brother was shown, resembling Garuru. This is notable because he actually appeared in the Captain Geroro manga before Garuru traveled to Earth. Later on, in episode 129, the Captain Geroro tv show proved to be successful enough to get a spin off tv series launched, Captain Gerlock, featuring a crew similar to the Garuru Platoon. Several Captain Geroro movies were also produced, with the launch of the 4th movie being mentioned in episode 252.

Episode 305 revealed that Kiko works for Sunirase as a mecha designer for the Captain Geroro anime series.

In episode 317, when Aki Hinata was pressed to reveal some hidden information to prove that she was really herself, she revealed that the Captain Geroro manga would end with chapter 317, replaced by Yoshizaki's new series, a home comedy called Kikuragesan. Both Captain Geroro and Kikuragesan appeared in episodes afterwards, although no new manga content has been shown, with the later appearances of Shounen Alpha magazines (333-B) only featuring old covers and art.

Visually, Geroro and his crew resemble Keronians, but almost all of them seem to have human-like hair, a rare feature for actual Keronians.

He has already hit old age and generally demonstrates a serious and mature behavior, but he can also resort to childish solutions at times, like using a fart to distract enemies. Although the specific details of his missions are unclear, it's known that the Gamato and its crew are fighting against other alien races, facing enemies like "Leader Gamimi", "General Dodome" (Episode 65-A) and the aliens from "Drill" (Episode 244-B).

Geroro looks like an older Keroro in a military uniform, with a less lively skin tone and a gray beard and hair. Often, the shadow of his hat covers one of his eyes. Captain Geroro is a mix of Keroro and Captain Juzo Okita from Space Battleship Yamato.

There are several named characters in the brief clips and scenes of Captain Geroro's fictional anime and manga aside from Captain Geroro himself.

He's the young and hotheaded Battle Chief of the Gamato. Like Giroro, he has an older brother, revealed in episode 80 of the Keroro anime in a chapter of the Captain Geroro manga. He was presumed dead in the war of the Pluto seas, but he reappears alive. His older brother's design resembles Garuru with short hair falling over his face. (See Captain Gerlock). The same episode also shows that Kiroro has a crush on Chief Nurse Moriri. Kiroro pilots the red space jet SupersGiro and, although Giroro doesn't like to admit it, he actually likes this character (episode 33). His first appearance in the Keroro anime was as an a draft in incomplete manga pages in episode 26.

His red face resembles Giroro's, aside from the lack of a scar. He has short brown hair and wears a blue and white jumpsuit. He's a mix of Giroro and Battle Chief Susumu Kodai from Space Battleship Yamato.

The survival of Kiroro's brother after the battle of Pluto resembles the survival of Mamoru Kodai, Susumu's brother who had seemingly died in the battlefield. Kiroro's brother taking the role of the space pirate Gerlock was based on the original plans for Mamoru, who'd have gone on to become Captain Harlock had it not been for some production problems of the Yamato tv series.

The only female member of the Gamato crew that has been shown. Her name was revealed in the Keroro anime only in episode 244-B, although she had appeared much earlier, in episode 26, alongside Kiroro and Gamimi.

In the Captain Geroro manga, she has been shown giving a chocolate to Captain Geroro with "love" written on it for Valentine's day (Episode 333-B), while, in the 4th anime movie of Captain Geroro (Episode 252), she had a romantic moment with Battle Chief Kiroro.

Most of her face is covered by a white area, but she has pink skin around it, alongside light brown hair. She wears a red scarf and a yellow and white jumpsuit. Her design is a mix of Sumomo's and nurse Yuki Mori from Space Battleship Yamato.

General Dodome (ドドメ将軍, General Dodome) is a secondary character in the Captain Geroro series. A great enemy of Captain Geroro, although he only meets failure in his attacks. His name has been mentioned several times (Episode 65-A, Episode 280-A), but the general himself has never been shown in the Keroro anime due to one reason or another. Also, apparently his character figures are hard to find and Keroro has never managed to get one (Episode 280-A).

Although he has never been shown, his name and role are based on General Domel from Space Battleship Yamato.

Leader Gamimi is the biggest villain of the Captain Geroro series and also the main antagonist of the 4th Captain Geroro movie (Episode 252). He's often shown with a small black and red creature with round yellow eyes on his shoulders, whose face resembles 3M's. He appeared for the first time as a manga draft in episode 26 of the Keroro anime, alongside most other characters from Captain Geroro.

He's thin and tall, with grayish skin, large slanted and completely black eyes, and a oversized head, contrasting with his fairly standard short blond hair. He wears a black cape covering a white suit. His design is a mix of the alien R Gray's and Leader Desler's, supreme commander of the people from the Gamilas planet in Space Battleship Yamato. 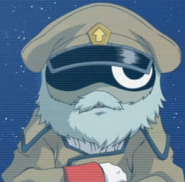