Giro-Sama (ギロさま, Giro-Sama) is a character in Keroro Gunso. He first appears in Giroro: The Man with Seven Faces de arimasu. His counterpart in Seven of Seven is Nana-Sama, the Intellectual Nana.

Giro-sama is known as the happy Giroro. He does nothing, but smile and laugh.

In his one appearance, he has no actual dialog and does not join in the fight against Giroppe.  Since he avoided any joke-character-related accidents, it is possible that he is a personification of a joke himself.

He appeared with a fluffy purple shag cut, purple scarf, and yellow tinted sunglasses. He wears his belt under his scarf, and his skull is purple with a look of joy on it. (Much like Giro-Sama's real expression.) 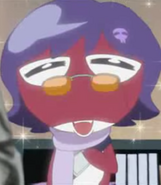 Add a photo to this gallery
Retrieved from "https://keroro.fandom.com/wiki/Giro-sama?oldid=42881"
Community content is available under CC-BY-SA unless otherwise noted.
... more about "Giro-sama"
RDF feed
Maintenance
NJ +