Girocchi (ギロっち, Girocchi) is a character in Keroro Gunso who first appeared in Giroro: The Man with Seven Faces de arimasu.

Her counterpart in Seven of Seven is Nanacchi, the Happy Nana.

Girocchi is Giroro as a housewife.  She is shown to be highly competent at cleaning, but is revealed to be a terrible cook. 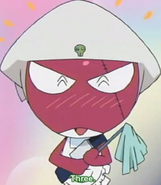 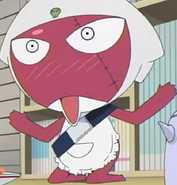 Add a photo to this gallery
This article is a stub. You can help the Keroro Wiki by expanding it.
Retrieved from "https://keroro.fandom.com/wiki/Girocchi?oldid=42880"
Community content is available under CC-BY-SA unless otherwise noted.