Girokko is a character from Keroro Gunso. She made her first and only appearance in Giroro: The Man with Seven Faces de arimasu.

Girokko is the side of Giroro's personality that he draws on when writing letters (or, at least, fixing Natsumi's letters) to Mutsumi's radio show.  In the short amount of time she exists for, she manages to enter a poetry contest hosted 623's radio station.  In keep with being a facet of Giroro, her joke character accident was missing out on hearing the results of said contest, due to Giroppe destroying the radio she was listening to the show with.  This also played into how frequently Natsumi herself is unable to listen to Mutsumi's radio show, due to the antics of the Keroro platoon. 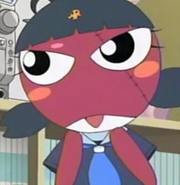 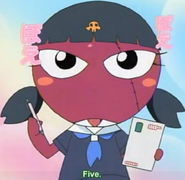 Add a photo to this gallery
Retrieved from "https://keroro.fandom.com/wiki/Girokko?oldid=33139"
Community content is available under CC-BY-SA unless otherwise noted.