Giroppe (ギロッペ, Giroppe) is a character from the Keroro Gunso anime. He was shown in Giroro, The Man with Seven Faces de arimasu.

His counterpart in Seven of Seven is Nanappe, the hot-tempered Nana.

Giroppe surfaced along with the other personalities of Giroro (including Giroro himself) when Giroro mistakenly roasted not a sweet potato, but one of Kururu's inventions. He is violent and ruthless and wants to take over Pekopon by himself, as the invasion had been at a standstill for a while. He even succeeded in dodging Natsumi Hinata's attacks and taking her hostage, and his abilities rival that of his original counterpart, Giroro. He might have taken over Pekopon were it not for the well-timed arrival of 556, who unknowingly brought out Giroppe's one weakness as a joke character by hitting both him and Giroro while making a pizza delivery to Keroro.

He looks mostly like a demon-like Giroro. His eyes are shaped similarly to that of the Giroro of the Keroro Platoon Double except that they are more pronounced and red. His symbol has changed to a skull with eyes like his. His eyes are also like Garuru's, too. 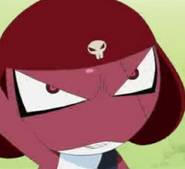 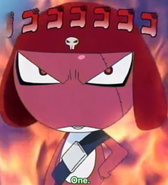 Add a photo to this gallery
Retrieved from "https://keroro.fandom.com/wiki/Giroppe?oldid=42879"
Community content is available under CC-BY-SA unless otherwise noted.