In order to get back at Keroro, Natsumi switched bodies with Keroro's mother and forced him to do household chores. However, meanwhile, Keroro's mother disappeared with Natsumi's body.

Keroro's Mother reveals to everyone that she's actually Natsumi and they had switched bodies in order to get back at Keroro for switching Akina Hinata's and Kururu's bodies to make Natsumi follow his orders. However, Keroro's Father arrives from the toilet and doesn't believe in their story. Meanwhile, Natsumi Hinata (actually, Keroro's mother) is happily sightseeing around Inner Tokyo's shopping district.Giroro soon finds her there, but is unable to go against 'Natsumi' and rather than taking her back home, decides to guard her, losing his mind when she mentions that it's like a date. They go through various stores with Giroro losing her mind as 'Natsumi' often was very close to him. Meanwhile, Keroro's Father ignoring the protests of 'Keroro's Mother', takes her to Atami's hotsprings since they had a meeting with Giroro's Father and couldn't miss the train.

'Natsumi' decides to try a bikini, convincing Giroro to go to the beach with her. When they get there, while changing behind some rocks, she complains about a zipper that got stuck, and Giroro immediately imagines that it's the zipper on the back of her dress. Giroro imagines undressing her and gets ready to do it for real, but is immediately interrupted by a succession of monsters. In the end, he manages to win the hard battle, but it turns out that the zipper was the one from Keroro's Mother's bag, not Natsumi's dress. He immediately faints, remaining like that until Tamama arrives, finding the pair. Meanwhile, later on, already by night, 'Keroro's Mother' arrives to the hotsprings with Keroro's Father, where they meet Giroro's father. She refuses to remove her towel, but Keroro's Father is confused by that and forcefully pulls it, leaving her embarrassed.

Natsumi commemorating the 'success' of her plan 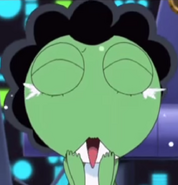 Natsumi crying about her missing body 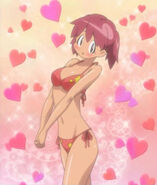 Natsumi embarrassed about removing her towel to go into the hotsprings
Add a photo to this gallery
Retrieved from "https://keroro.fandom.com/wiki/Giroro:_the_problem_is_this_zipper,_de_arimasu?oldid=49525"
Community content is available under CC-BY-SA unless otherwise noted.