Giruru is a mutant Keronian of pure blue slime. Two drops of slime of alternate sizes lay on each of his helmet ears. He commonly creates a large puddle of slime beneath his feet. He has large yellow eyes. His symbol is a small yellow drop. Giruru's symbol also looks like a yellow pear. His weakness is powder, he solidifies on contact. In the anime, he is a blue tealish color and he only has 1 eye which is colored differently. He also has a different colored symbol.

Giruru is the older brother of Dokuku, revealed when Dokuku freed him[1]. He also knows what Dokuku is saying even though he is basically incomprehensible. Hanana loves him. She often consults her powerful beloved for protection though this is often a burden for Giruru whom Hanana annoys and as a result, fails to return her feelings. Although in the fandom, Hanana seems to be with Yukiki more.

Giruru is made of liquid, and he can manipulate the shape of his body. He also has the ability to turn others into puddles. 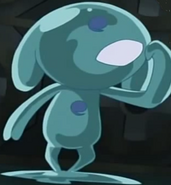 How he appears in the Anime

Giruru's defeat
Add a photo to this gallery

Retrieved from "https://keroro.fandom.com/wiki/Giruru?oldid=51351"
Community content is available under CC-BY-SA unless otherwise noted.