Gyororo's mission is to spy on the Keroro Platoon, and report their findings to Shurara. Nuii is their assigned partner to infiltrate the base with them. Gyororo was the first Shurara Corps character to appear, briefly at the end of episode 159. They made another short apperance at the end of episode 161. At the beginning, their tail is visible. They are fully revealed in episode 188 and turned out to be manipulating Nuii to turn the Keroro Platoon into stuffed toys. They end their sentences with de ansu, a more modern way of saying the archaic phrase de gozaru.

Nuii, once their comrade, infiltrated the house under the identity of Natsumi's old doll, Ku-chan. Gyororo ordered Nuii to turn the Keroro Platoon and Fuyuki into dolls. However, when ordered to attack Natsumi, Nuii disobeyed, and restrained Gyororo long enough for Keroro to trap them inside a bubble. However, as she did so, Gyororo flew into an outrage and ripped out her stitching with the sheer power of their eyes. They also called her nothing but a toy doll. Once fully captured, they became a prisoner of war of the Keroro Platoon.

Gyororo is a purple and green tadpole Keronian with seven eyes covering their body, helmet, and the tip of their long prehensile tail. They have a crazed smile full of sharp teeth, and red pupils. Unlike the majority of other tadpoles, the markings on their face and stomach are light purple instead of white.

Gyororo can camouflage, making them a perfect spy (although, one eye is often noticeable through surfaces such as walls and floors). They can channel energy using their eyes and shoot pellets with them.

How Gyororo appeared in the anime. 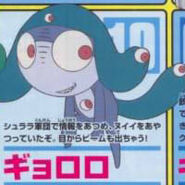 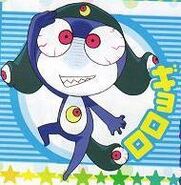 Gyororo's defeat
Add a photo to this gallery