Hikari is a mysterious alien disguised as a school girl enrolling at Natsumi's school. Natsumi Hinata began to investigate her, and later Hikari befriended Natsumi until she went back to her planet alongside Yamato and Fuchiko, after Pyonta's arrest.

She introduced herself as a new student, however Natsumi felt unimpressed about the ears on their heads. Natsumi couldn't stop following her until she revealed her alien form, which proved her suspicions true.

In her human form, her hair is brown with long pigtails. She wears yellow ribbons on her hair with long pink rabbit ears exposed on her head. Her eyes are sharp and cat-like, with magenta-colored pupils and segmented lines on her cheeks resembling whiskers.

Hikari, unlike Yamato and Fuchiko, isn't shown to have a gluttonous appetite. Hikari tries her best to fit in with her fellow students, and she cares about Yamato and Fuchiko, as she tries to make them turn back into their human forms. She seems to also be very gracious to Natsumi. 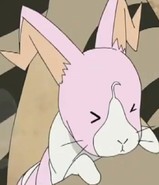 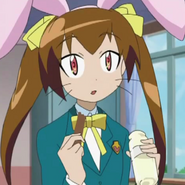 Add a photo to this gallery
Retrieved from "https://keroro.fandom.com/wiki/Hikari_Usanda?oldid=44189"
Community content is available under CC-BY-SA unless otherwise noted.