Io (イオ, Io) is one of the main characters in Keroro Gunso the Super Movie 5. He is Rana's brother and a Mana in human form.

Io, along with his sister Rana, first appear when Fuyuki is worried about Keroro. Io and Rana appear to mess around with Fuyuki, until revealing themselves, they then catch Fuyuki after he faints.

Later on they managed to find Keroro, and than they proceed to try and roast him over a fire. After Fuyuki obtains a translator, they seem shocked, Io is finally able to introduce himself, and is confused when Fuyuki calls Keroro, Keroro as both him and his sister call him 'Kainini' which means Gourmet (Much to Keroro's displeasure). Io explains to Keroro and Fuyuki what the spirits they keep seeing are called, which is Mana. Io also says that the people of Roanoker island love the spirits thus why he and his sister protect the island. Io and Rana then confess they are Mana, and proceed to disappear. When shown the statue, Io and Rana agree that they have seen it, and is sure it's a moai. Io and Rana soon warn Fuyuyki about putting the moai back on the island, saying Aku-Aku will find them and that they should leave, Io is than shown clapping after Keroro's speech, saying he is very admirable. 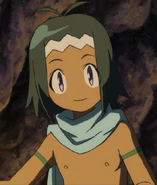 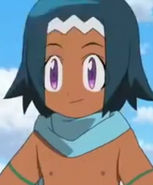 Movie 5 Illustration by Mine Yoshizaki.
Add a photo to this gallery
Retrieved from "https://keroro.fandom.com/wiki/Io?oldid=37706"
Community content is available under CC-BY-SA unless otherwise noted.