Captain Jirara was the leader of the assassin squad that Dororo (then Zeroro) and Zoruru used to be in. His mastery of Keronian Assassin Magic is unparalleled.

Jirara is a navy blue and pale purple Keronian. He wears a metal assassin mask and has robotic arms. He has normal ear flaps and three red dots for eyes, with one being in the center of his forehead. His belly symbol is a silver pointed shuriken.

Jirara was part of the dangerous assassin group that Dororo used to be in. Jirara made his debut in episode 189, arriving on Pekopon. He captured Keroro, Fuyuki Hinata, and Giroro, luring Dororo to set off and rescue them. Possessing Koyuki Azumaya, it seemed Dororo had been killed off, but thanks to a charm of protection Koyuki had given him, he survived and had a final battle with Jirara. He defeated his old captain, realizing that Jirara had planned to be defeated from the beginning, for he was tired of living the life of a bloodthirsty assassin. At the end of the episode, Jirara was seen alive before departure. In the manga, he is briefly shown in a flashback, praising Zeroro before Zoruru decided to attack the Keroro Platoon. 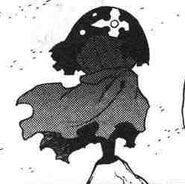 Add a photo to this gallery
Retrieved from "https://keroro.fandom.com/wiki/Jirara?oldid=45862"
Community content is available under CC-BY-SA unless otherwise noted.