Joriri (ジョリリ, Joriri) is a character in the Keroro Gunso anime and the Chō Keroro Gunsō UC: Keroro Robo Daikessen manga. He debuted as a fan submitted character in Keroro Land volume 10 before being chosen to appear in the anime.

Joriri is a mysterious wandering Keronian who appeared one day on the playground of the Young Keroro and his friends around the time they were dealing with a group of bullies. Keroro and his friends were initially impressed by him, but his advice proved to be useless and he didn't help them fight. They eventually won on their own, which Zeroro tried to explain as part of his advice[1].

Every time he is about to give advice, he gets a footstool, puts his foot on it, and rubs his chin with his thumb and index finger, a sign which quickly became his trademark.

One day, after seeing Joriri on tv, the young Keroro told them that he was a weird old man who wandered around their home. Surprisingly, Keroro's Father revealed that he's actually their relative, and he was an hero in the Gekonam War. Keroro's Mother talked about how when he was young, all girls loved him, causing his father to get jealous, ending the conversation [2].

Eventually, after the Keroro Platoon was formed and left for Earth, Joriri followed them seemingly in order to return an old incomplete homework to Keroro[3].

Joriri continued his free lifestyle on Earth, and one day Keroro was inspired to follow him. However, it turned out Joriri had a busy schedule and was even a day trader on the cosmic stock market, taking up entire nights with it.

Later on, by mistake, believing it was a line for ramen, he ended up enlisting on the Keron Army again, working as Tamama's underling for a brief time. He seemingly knew Keroro's Secret Base even better than Tamama. He quickly left, although from this point on addresses Tamama as a superior[4].

In Chō Keroro Gunsō UC: Keroro Robo Daikessen, during a big operation of the Viper clan to conquer Earth, the Keroro platoon ended up split up in the North Pole and Keroro was completely surrounded by enemies, when Joriri arrived to save him, piloting a customized top of the line Spark Jegama robot. Keroro initially didn't believe that his savior was actually Joriri, but soon accepted it was him, finally acknowledging the story his father told about Joriri. Joriri continued in action alongside the Keroro platoon until the end of his campaign, with Keroro getting a glimpse of a more serious side of him a couple of times, although it always disappeared as soon as it appeared.

Joriri is a good friend of Keroro and always tries to help him, although failing most of the time. Keroro when he was younger, initially admired him, but soon was quite mixed about him, changing from admiration to disrespect all the time. In spite of that, Joriri's carefree lifestyle seems to have influenced Keroro in the present day. He only truly seemed to accept the story his parents told about Joriri as a war hero when he sees him in action piloting the Keron Army's newest robot type[5].

When Dororo was younger, he idolized Joriri the most out of everyone in the group, as he was the only one that could comprehend the meaning behind Joriri's advice. In the present day, Dororo's habit of reading too deeply into everything seems to be Joriri's influence.

Giroro was one of his friends. Like everyone else in the group, he initially idolized him when they first met, but quickly came to see him as unreliable, even if friendly.

Pururu was one of his friends. Like everyone else in the group, she initially idolized him when she was they first met, but quickly came to see him as unreliable, even if friendly. In the present day, due to him interrupting her marriage meeting with Bariri, the headquarters of the Keronian Army came to believe she has a crush on Joriri[6], which added up to a series of romantic misunderstandings involving both.

The Termite Queen fell in love with him and she is seen along with him at the end of episode 198. Joriri openly accepts her love and allows her to fawn over him.

Joriri's relative, although it's not known what's exactly their relation. He describes Joriri as the pride of their family, a great war hero who should be respected even if he seems goofy nowadays. He's even jealous of the attention that his wife gives him.

She talks about how Joriri was the desire of every girl when he was younger, causing Keroro's Father to get jealous. 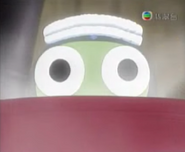