Originally a new weapon developed by the Keroro Platoon, the battle suit was first made as a collar that was worn by Natsumi when Giroro and Sumomo in her Pekoponian Suit fought, in Episode 38. The collar materialized the suit for her and it managed to destroy the Pekoponian suit without damaging Sumomo. However, when the KLL-00723-GT entered it's berserker state, Natsumi fell under it's control, but Giroro managed to free her by using a secret password. She used the suit again to fight the Garuru Platoon after they tried to invade Earth and replace the Keroro Platoon. She managed to destroy most incoming warheads, but once she assaulted the Garuru Platoon's base, Tororo hacked her suit and sabotaged it, rendering her useless until the Keroro Platoon members rose again.

After the whole ordeal, the suit was later made to arm Natsumi in different ways without the use of it's collar. This is shown via Keroro's Kero Ball in Episode 151 B, and the battle suit sent from the Keroro Platoon's command centre in episode 201 B.

This suit featuring Natsumi's armor is based on the Mobile Suits from the Gundam franchise. The ribbon on her head holds two lightsaber-like swords for combat. Aside from summoning weapons, she can also fly with energy wings from her back. During the Garuru Platoon's invasion, an A.I. based on Giroro implanted itself in the suit to navigate the systems.

In order to deactivate it in an emergency case, Kururu placed a voice password, the English phrase "Natsumi my love. Kiss me tender and hold me tight for ever", which he, Keroro and Tamama purposely made to embarrass Giroro. 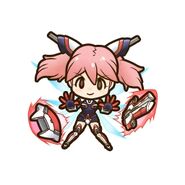 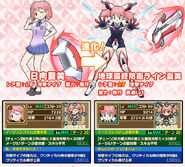 Natsumi in the game, Keroro x Summons Board

Add a photo to this gallery
Retrieved from "https://keroro.fandom.com/wiki/KLL-00723-GT?oldid=50809"
Community content is available under CC-BY-SA unless otherwise noted.