Kagege is a white Keronian with blue and purple flames. He wears a violet scarf. His left eye has a blue cross. His shadow is in the form of large blue flames with his missing left blue eye with a white cross.

Kagege has the ability to control the shadows of his victims, putting their shadows against them, as seen in episode 202. The shadows have the same strengths and weaknesses as their owners. The shadow replicas can be destroyed by destroying the light source given to cast them in the first place. He was the one to originally create the shadow assassin tricks used by Jirara.

His creator's name is Chitose-San from the Art submission.

Kagege's name is derived from the Japanese word for 'shadow', "kage" (影, "kage").

How he appears in the anime 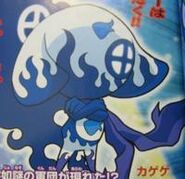 Kagege's defeat
Add a photo to this gallery
This article is a stub. You can help the Keroro Wiki by expanding it.
Retrieved from "https://keroro.fandom.com/wiki/Kagege?oldid=53230"
Community content is available under CC-BY-SA unless otherwise noted.
... more about "Kagege"
RDF feed
Japanese name
カゲゲ +
Maintenance
NJ +
Voice actor (Japan)
Toshio Furukawa +