Keroror's Father (ケロロの父, Keroro no chichi), also known as The Demon Sergeant (鬼軍曹, Oni gunsō), is a character in Keroro Gunso. He is the husband to Keroro's Mother and the father of Keroro.

He is a famed war veteran, and has obviously inspired Keroro to become a soldier. However, though Keroro greatly respects his father, it is clear that Keroro is also quite afraid of him. In Kero 0: Depart! Assembly of Everyone!!, it's shown that he generally trusts in Keroro

In the anime, Keroro's father is frequently on vacation. He usually brings Giroro's father on vacation with him. During Chrismas Eve, they assisted Santa Claus in delivering gifts and rewarded with a trip to hot springs during spring season.

The Demon Sergeant's appearance is similar to Keroro's, except he is olive green in color, and wears a pickelhaube helmet - a black helmet that has a spike protruding from the top. He also has a toothbrush mustache and a blue tie. He carries something similar to a US military Duffel bag (his is a large circular bag that is light purple and has small yellow stars).

In the anime, he's usually shown with half closed eyes, like he's tired or sleepy, and he's also seen like that in his first manga appearance, but in later ones he has been shown with open round eyes like Keroro's. However, in Kero 0: Depart! Assembly of Everyone!!, he kept the open round eyes even in the anime. 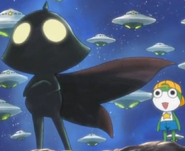 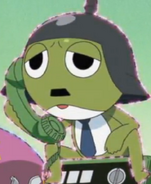 Add a photo to this gallery
Retrieved from "https://keroro.fandom.com/wiki/Keroro%27s_Father?oldid=50895"
Community content is available under CC-BY-SA unless otherwise noted.