Keroro Land (ケロロランド, Keroro Rando) is a spin-off magazine of the series Keroro Gunso authored by Mine Yoshizaki. It is published by Kadokawa Shoten and serialized in Shonen Ace.

Keroro Land is a children's magazine that is focused on the anime and manga series Keroro Gunso. The magazines contain games, previews of future episodes, advertisements for merchandise, and even a section of yonkoma comics drawn by several well-known dōjinshi artists. The magazine also contains a section where readers are creating their own Keronian (Also known as "Orikero") and the winning entries are drawn by Mine Yoshizaki, becoming the official characters of Keroro Gunso. Although it is unknown what the winning entries were going to be used for, a card game entitled Anokoro Keroro Gunso was created where some of the winning Keronian designs were used as characters. Some of these characters also made it into the anime series. However despite Anokoro Keroro Gunso presumbly ends, Keroro Land still continues to design more Keronians and so on, possibly for another new Keroro game or when the manga ends.[cite this]

Most Keronians made by the winning entries in Keroro Land are mostly based on other organisms rather than frogs and lizards or based on human's occupation, but despite this, some still possess tadpole tails. Some Keronians are also based on other characters, as well.

The card game is a prequel that revolves around the original Keroro Platoon's first real mission. Keroro, Giroro, Zeroro, Firuru and Zoruru form their own teams and split up to fight the Black Stars, a team of four deadly dare devils bent on conquering Keron. 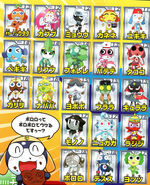 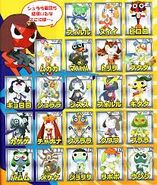 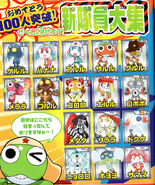 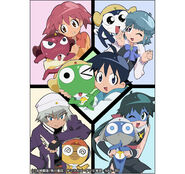 Retrieved from "https://keroro.fandom.com/wiki/Keroro_Land?oldid=48177"
Community content is available under CC-BY-SA unless otherwise noted.