It has also been remade in Keroro, a flash project with new characters as Episode 1 and Episode 2.

Keroro’s invasion of Earth doesn’t go exactly as planned, and he ends up running a vacuum instead of ruling the planet. But hey, at least he gets his own room! (Synopsis provided by Funimation)

A few weeks ago, a mass of aliens went to conquer Earth. Fuyuki and Natusmi are seen running, as Natsumi was supposed to be killed by an invader after she tripped. However it is revealed to only be apart of Fuyuki's dream.

Natsumi is seen trying to wake her brother up, but with little success. Natsumi then points at the wall out of nowhere, saying that there is an alien. Fuyuki finally wakes up, and ironically, there really is an alien where Natsumi was pointing. The duo easily capture the alien, and they leave for school as they are late.

Fuyuki is reveled as having taken the alien's weapon, the Kero ball, and experiments with it. When he thought he broke it, he slammed it to the ground, but sent a signal to the other aliens just outside Earth's atmosphere. At the house, the alien manages to escape, plotting revenge.

Natsumi walks home late, as she was stopped by her friends Yayoi and Satuski. On her way home she comes across Saburo, a handsome delinquent who is in the same grade as Natsumi. She finally makes her way home, only to get caught in the alien's trap. He holds up a large space leech, as he is about to have it eat Natsumi, until he gets Zapped by Fuyuki, who states that he floated all the way home. He helps his older sister down, but they both get captured. The alien states that because he now has his Kero Ball, he can kill them properly. He then reveals that he is from the 58th planet of the Large Gamma system, Planet Keron, and that he is the Space Invasion Force Special Preliminary Infiltration Squad Leader, Sergeant Keroro and he, with his four subordinates, are preparing for an attack on Earth, which he calls Pekopon.

Just then, the Natsumi and Fuyuki's Mother, Aki Hinata, arrives on her motorcycle. The duo tell Keroro some things she might do if she catches Keroro. (Turning him into Frog soup, getting run over and getting dissected.) Keroro decides to kill her when she opens the door, the children warn Aki not to come in, but she assumes they brought home another wild animal, she barges inside as Keroro starts to attack her, however the Kero ball is out of juice and Keroro prepares for the worst. Fuyuki then tells his mother to let Keroro stay, as they might become friends. Aki agrees, saying he will be the perfect model for her new manga. Keroro than goes to hug Fuyuki, however he decides to still invade. Keroro says he will take the Kero ball to their mothership to get it fixed, but then they hear a transmission that the other aliens are leaving them behind. Keroro than becomes a house cleaner/slave to the Hinatas'.

(In order of Appearance.)

Differences from the Manga Edit 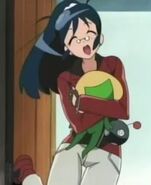 Keroro receiving a message from HQ.

Add a photo to this gallery
Retrieved from "https://keroro.fandom.com/wiki/Keroro_Lands,_de_arimasu?oldid=46975"
Community content is available under CC-BY-SA unless otherwise noted.