The Keroro Platoon Girl Type (女の子型ケロロ小隊, Onnanoko Gata Keroro Shoutai) or Keroro Friends (ケロロフレンズ, Keroro Furenzu) is the Keroro Platoon after being transformed into human girls. They appear in collaboration with the mobile RPG Kemono Friends. The Kemono Friends game by Nexon was part of a multimedia project based on original concepts by Keroro's own creator, Mine Yoshizaki. Their new forms and basic personalities for the tie-in were designed directly by Mine Yoshizaki, while an event Quest tied to the Collaboration was written with his supervision.

In addition to their appearance in the now dead mobile game, they also appeared in the Kemono Friends tie-in with the CHAOS TCG. Friend Keroro also has made a brief appearance in an extra page of chapter 264 of the Keroro Gunsou manga (Shounen Ace numbering), showing a different take on her first meeting with Mirai.

The mobile game's story started with an amnesiac teenager waking up in Japari Park, a giant integrated safari zoo with animals from around the entire world. Mirai, a Park Guide, welcomes the visitor, and they soon meet Serval, a human-like girl with cat ears and tail. Mirai reveals that a certain day something called "Sandstar" fell from the skies, turning the animals of the park into Animal Girls, also known as Friends, and Serval was one of them. Shortly afterwards, unknown monsters that soon came to be known as "Ceruleans" attacked and most people evacuated, leaving Mirai and the Animal Girls behind, with Mirai working alongside them to restore the park. Soon, they learn that the protagonist has a talisman that can boost the power of the Friends in combat. The protagonist had an invitation to the park, as well as a vague childhood memory related to it, and after seeing that power, decides to help too. Soon, they gather more and more Friends as they travel through Japari Park, in their efforts to stop the Ceruleans and restore the Park.

In the event quests tied to the collaboration, the Keroro Platoon decides to invade Japari Park, although they didn't know about the Sandstar incident. While flying over the area, their aircraft is attacked by a flying Cerulean and Keroro accidentally activates the self-destruction switch. Due to the explosion, fall unconscious in different areas of the park's Aku Island. Keroro wakes up, and soon noticed that his appearance and voice had changed into that of a Pekoponian girl. Shortly afterwards, Keroro is attacked by Ceruleans, who she describes as enemy aliens, but is saved in the last moment by Mirai, Serval and the main character.

The Park Guide wonders why Keroro isn't in her database, only for Keroro to reveal herself as an alien. After some confusion, the Park Guide explains Japari Park's current situation to Keroro. Asking for their help, Keroro decides to gather the platoon and especially Kururu, hoping to find a way back to normal.

Following rumors about a mysterious "Girl in Red who exterminated a powerful Cerulean", they go into the Forest Area, and, after going through many traps, where Serval showcases her agility, they finally meet Giroro, who is constantly teased by Keroro about becoming a girl. Keroro hides their original invasion goal from the others, still planning to attempt it later.

Afterwards, there were news about a "Ghost seeking sweets" from the nearby Swamp Area. After Giroro is momentarily paralyzed due to her fear of ghosts, they find Tamama, who was wandering around the area while screaming for sweets. Tamama reveals that there was a fearful creature in that area, and while hiding from it, she ended up so hungry she could barely move. They eventually meet that creature - a Cerulean that resembled a giant gelatinous Natsumi. The Keroro platoon members are initially immobilized by fear, and Giroro and Tamama are taken out and eaten in one shot. The Park Guide explains that the Cerulean likely absorbed some of Natsumi's DNA that might have been in their ship, like hair strands. After being rescued by the Hero and the other Animal Girls, they gather courage and decided to fight, destroying the monster. Although there weren't sweets, Serval talks about Japari Manju, a famous specialty from Japari Park and they promise to make a "Japaman" party later.

Following hints about Kururu's whereabouts, they go into the Desert Area. However, there, they hear many contradictory stories about her, some talking about an hero, others talking about a trickster. Finally, when Ceruleans attack, they're helped by a unidentified ninja-like Animal Girl, who Keroro decides to call "Mysterious Beauty". That girl turns out to be Dororo, who initially enjoys the attention, but eventually reveals her identity in anger after noticing the group had completely forgotten about her. News about a dangerous Cerulean quickly spread around Japari Park, and their quest for Kururu is put on hold while Keroro agrees to deal with it in order to protect Japari Park and the friends they made there.

The giant Cerulean resembled a giant gelatinous version of Friend Keroro. Kururu herself was facing the giant Cerulean alone, although without much success. The others go to her rescue, but somehow lose their will to save her after being annoyed by Kururu's twisted personality. After she's rescued, Kururu reveals that the Cerulean is an enemy alien that took a form resembling a giant Keroro due to absorbing their DNA - it was the flying creature that attacked their aircraft in the first place. Feeling responsible for it, Keroro tells the protagonist, Serval and the others to leave the battle to them, but they deny it, telling them that they're friends and should all fight together.

In the end, the Cerulean is destroyed. Kururu reveals that they can go back to their normal selves by leaving the park and distancing themselves from the Sandstar. However, before that, they have the promised party with lots of Japari Manju.

After the party is over, however, rather than leaving and going back to normal, Keroro says they'll help the protagonist, Serval and the others in their own quest. All other platoon members quickly agree, offering their talents to help their new friends.

She breaks the 4th wall several times, talking about character types in the main story and outright mentioning the "level up" mechanic in all of her level up quotes.

Keroro boasts to the player avatar about being a model woman and soldier, able to cook, do the laundry, clean and invade. In one of her home screen quotes, she's seen happily singing and teasing the Player about whether he noticed anything different about her that day.

She fights with a beam saber similar to the one wielded by the RX-78 Gundam and combined with the Hero's mysterious power she's able to use the Keron Star Buster - projecting energy from the Keron Star into a star shaped energy attack.

After becoming a girl, Giroro often uses the gender neutral and polite watashi (私, watashi) to reference herself, rather than Giroro's usual blunt and masculine ore (俺, ore). Sometimes, she also ends sentences with the feminine wa (わ, wa) particle. Keroro teases her about how not only her appearance changed, but also her character, angering her, who denies to have changed at all, even though she obviously had changed.

Her crush for Natsumi is still strong, with her being excited about training alongside Natsumi or imagining her with animal ears. However, in addition to that, she gets embarrassed when thanking the player avatar for their help and angrily denies liking them.

Tamama's surface personality and speech style remain the same, although her darker side seems absent. She still talks in a boyish, rather than getting a more feminine speech style like Dororo and Giroro. When asked about how she felt about becoming a girl, she says that it's a bit embarrassing, but otherwise doesn't seem bothered by the change.

She boasts to the player avatar about being the cutest girl and doesn't mind sharing food with them. Oddly, there are no signs of her dark personality. Even when she uses the Tamama Impact her cute smiling face and voice are kept.

Dororo admires the harmony in the Japari Park and swears to protect it. She appears to help the Keroro and the others while they search for Kururu, but they don't recognize her, calling her only a "mystery beauty". Dororo actually enjoys the role, although eventually gets disappointed when she notices that "Dororo" is being completely forgotten by the others. Even after mentioning her name, the others didn't remember her, only actually recognizing her after she went into a furious trauma mode where she beat up Keroro.

She changes her speech style entirely after becoming a girl. It's still comically formal, but more feminine. Her sessha (拙者, sessha), an archaic "I" used by Samurai, is replaced by the extremely formal watakushi (私, watakushi). Meanwhile, in all her voiced dialogue, her de gozaru (でござる, de gozaru) sentence ender is replaced by desu ne (ですね, desu ne). In her non-voiced script though, she also uses a simple desu (です, desu) quite a bit.

When she's in trauma mode, she calls Keroro by Keroro-chan, rather than Keroro-kun. Differently from Dororo's usual trauma mode though, she actually attacks Keroro while crying, repeatedly screaming "idiot!".

In the home screen, Dororo asks the player avatar to have tea with her and timidly wonders whether they think she's cute.

Dororo has been grouped into the cool attribute section, and she is good at fighting on snowy terrain, but she's poor in the plains terrain.

Kururu considers the events happening around them fun. According to her profile, she notices that there had also been personality changes alongside the physical ones, but isn't bothered by that and claims that her actual nature isn't changed by minor details like those. Her speech style isn't any different from before either.

She teases the player avatar in several of her home screen quotes, wondering how they could stand her or whether they had fallen for her. In her "wild release" (level limit up) quote, she promises to show her best to the player.

Concept art for the nameless Player Avatars, both male and female. The two designs were only revealed by concept art in the 4th anime Guidebook and weren't visible in the game.

All conditions to recruit Friend Keroro are met

Keroro using her Friend form exclusive attack, the Keron Star Buster, in combination with the other Friends' power

Giroro denies that she has changed, but uses the gender neutral "Watashi" to reference herself rather than Giroro's usual masculine "Ore". 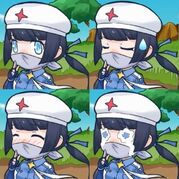 An illustration made by Mine Yoshizaki at the end of the event's run showing Keroro and Serval saying goodbye to each other. 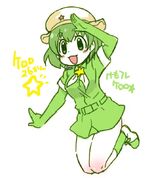 Retrieved from "https://keroro.fandom.com/wiki/Keroro_Platoon_Girl_Type?oldid=50214"
Community content is available under CC-BY-SA unless otherwise noted.