Keroro x Summons Board (ケロロ ｘ サモンズボード) was a special  collaboration event between the series Keroro and the mobile game Summons Board.

The dungeon had a total of five varying difficulties, each with a higher chance at obtaining a "monster drop" from the boss, namely Garuru.

The collaboration gacha featured the Keroro Platoon and some select characters from the anime. Players were able to obtain units from the gacha once for five "gems (in-game premium currency)", or eleven times for fifty gems.

All units introduced during this event had the new flash-anime-styled drawing.

As mentioned earlier, the dungeon consisted of five varying difficulties, each with an increasingly better chance at obtaining a monster drop from the boss, Garuru. Other members of the Garuru Platoon have the same drop rate in all levels.

The gacha was available during this event only. One "gacha" costs five gems (premium currency). Players were also able to buy eleven times for a discounted price of fifty gems.

All units are able to be evolved, except Keroro Robo KAP-001. 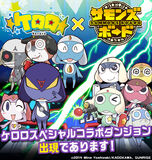 Retrieved from "https://keroro.fandom.com/wiki/Keroro_x_Summons_Board?oldid=48235"
Community content is available under CC-BY-SA unless otherwise noted.